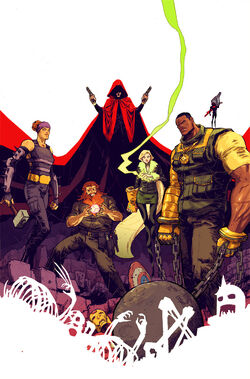 Base of Operations
The Hood's Lair, Hell
Affiliations

There is a new world order coming. This is just the first step... of the new Illuminati

The Illuminati is a group of supervillain set up by The Hood to come together. The Hood's objective was to use the Illuminati to acquire power, and become part of the "big leagues" of super villains.[1]

Following a failed attempt at stealing Asgardian weapons,[2] the Hood tried to amass an army with the villains that had been victims of abuse from S.H.I.E.L.D. when they were imprisoned at Pleasant Hill. When he proposed to target the families of their enemies, Titania confronted Robbins, believing that to be a line that shouldn't be crossed. She forced the Hood to teleport them away from the base, and during an ensuing confrontation, she defeated him and destroyed his cloak, making him lose any of the powers it granted him.[3]

Retrieved from "https://marvel.fandom.com/wiki/Illuminati_(Hood%27s)_(Earth-616)?oldid=3891269"
Community content is available under CC-BY-SA unless otherwise noted.