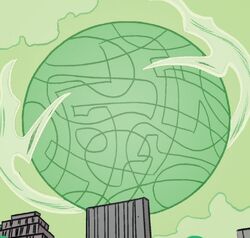 The Illuminatrix was considered by the Silver Surfer as the height of Zenn-Lavian technology. A miniature version of it was used by the Hordax in an attempt to steal the Earth of its culture to save it from the Keeper of the Great Truth.

The Silver Surfer stopped the Hordax's attempt on the Earth's culture, unaware of their noble intentions.[1] The Keeper of the Great Truth eventually reached the Earth, and used a planet-sized version of the Illuminatrix to transform the Earth's culture into a copy of Zenn-La's, like she had done to many other planets.[2]

With each second that passed, the Illuminatrix was closer to completing an orbit around the Earth, making the conversion process virtually irreversible. Norrin used all of his Power Cosmic in a last-ditch effort to save the Earth by destroying the Illuminatrix. The destruction caused every trace of Zenn-Lavian culture to be erased from the universe, from not only the converted planets, but Zenn-La itself as well.[3]

The Illuminatrix is a hybrid of magic and technology, better described as "magi-tech."[2] A miniature version of it had the capability of absorbing the essence of every work of art and every single piece of expression made by a culture. The Illuminatrix can also empower individuals with this absorbed culture, namely allowing them to gain the abilities and behavior of fictional characters, myths and legends.[1]

A planet-sized version of the Illuminatrix is capable of completely warping the culture of a planet, turning it into a replica of Zenn-La's.[2]

Retrieved from "https://marvel.fandom.com/wiki/Illuminatrix?oldid=5557441"
Community content is available under CC-BY-SA unless otherwise noted.