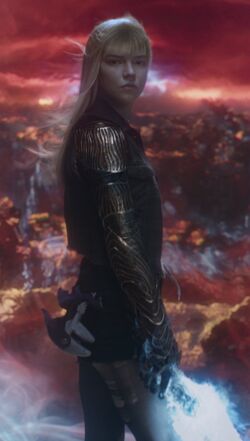 Illyana was born in Siberia, Russia. As a child, she was taken as a sex slave, and tormented by gangsters, whom she internalized as otherworldly beings she called the "Smiley Men"". To escape the suffering, Illyana transported herself mentally to a imaginary dimension she called Limbo alongside her dragon toy Lockheed. In Limbo, Lockheed was turned into a real dragon and Illyana gained magical abilities, however due to her spending too much time in there, Limbo itself also became real. After gaining control of her powers, Illyana murdered with her sword and Lockheed the men who used her as a sex slave, killing 18 of them one by one. Because of this, she ended up in the Milbury Hospital, where she met Roberto Da Costa, Sam Guthrie and Rahne Sinclair.[2]

When Danielle Moonstar arrived at Milbury Hospital, Illyana and her friends met her in the meeting room. There Illyana showed contempt for Dani and was forced by Dr. Reyes to show Dani the hospital sites. While reluctantly showing it to her, Illyana made several misplaced comments against Dani and told her that there was nothing to separate her from freedom, only to taunt her when she collided with the force field that covered the place. When an enraged Dani tried to attack Illyana, she teleported away from there.[2]

The next day, when Dani entered the game room, Illyana immediately began making disparaging remarks against her and forcibly forcing her to display her powers. When Dani hit Illyana with her head in the face, Illyana was annoyed and summoned her sword to attack Dani, who was only protected by a force field from Dr. Reyes. Because of this, they were both taken to isolation, where Illyana had certain visions of her past due to Dani being unconsciously using her powers.[2]

At night, when Illyana went with the boys to a place where Dr. Reyes was supposedly unable to keep an eye on them, they ran into Dani and Rahne on the way and Illyana reluctantly agreed to let the two accompany them. There, Illyana pulled out a lie detector and they began to play around, with Illyana revealing to them that the reason she's there was because she killed 18 men, one by one, with her sword and the help of Lockheed. In the following days the youth continued to bond and while they were in the playroom, Illyana dressed herself as Dr. Reyes and for the first time really had fun with all her fellow patients. That same night, Roberto had an illusion of Illyana and his dead girlfriend in the pool. When Illyana entered the room she asked what had happened, much to Roberto's surprise as he thought that the Illyana he had kissed was real. Upon seeing Roberto's confrontation with Dr. Reyes, Illyana decided to interfere and side with her friend Berto against Reyes. This ended with her her back in isolation.[2]

In isolation, Illyana felt that the door to her cell slide open, only to see the face of a Smiling Man's mask painted on the wall. This made Illyana realize that the one who was generating all those terrifying visions was Dani all along. Illyana attacked Dani, opening a portal to Limbo and taking her there. However, Dani unconsciously used her power and transformed her face into the mask of a Smiling Man, causing Illyana to scream in terror and fall to the ground, to be subsequently injected by Dr. Reyes with a tranquilizer and taken to her room. Later in her room Illyana was visited by Dani, who brought her to Lockheed, whom Illyana had dropped it when she was unconscious. Illyana opened up much to Dani and told her that Limbo was a place where she and Lockheed went when they did not feel safe. However, from so much visiting and spending so much time there, it became a real place.[2]

When that same night Dr. Reyes was notified by the Essex Corporation to kill Dani, it caused Dani to use her power and Illyana to enter a dream of her past with the Smiley Men, who because of Dani's power manifested in the hospital. Illyana and Sam Guthrie tried to escape from them, however a Smiling Man took Illyana and tried to take her away only to be stopped by Sam with a fire extinguisher found in the hallway. Illyana and Sam ran into Dr. Reyes on the way, only for her to run off when she saw a Smiling Man. Then Illyana escaped through the Limbo, leaving Sam alone in the face of danger. When Sam and Roberto were ambushed by the Smiley Men, Illyana entered through a portal and killed all of the Smiley Men, saving her friends. After overcoming her nightmare, Illyana met her friends in Dr. Reyes' office, where together they decided to go kill her in order to eliminate the force field that prevented them from leaving. They followed her bloo trail to the stretcher room, where Reyes explained that he wanted to turn them into assassins for the Essex Corporation. Before Illyana and her friends could do anything, Reyes trapped them in force fields and set out to kill Dani.[2]

However, Dani unconsciously summoned the Demon Bear to defend herself, who mauled Reyes to death. With the force fields dropped, Illyana use her powers to enter Limbo and recruit a real version of Lockheed to confront the creature. She jumped onto the Demon Bear, slicing him on his back, however the Bear ignored Illyana and turned his attention towards reaching Dani. Illyana and Lockheed chased Demon Bear to the chapel and attacked him again, this time with the help of Roberto and Sam. The Bear hit Illyana and she quickly teleported herself out of the chapel, falling several meters to the ground and being considerably stunned and powerless before the Bear. When Dani finally defeated the Bear and morning came, Illyana and her friends gathered their belongings and decided to head the nearest town.[2]

Seemingly those of the Illyana Rasputina of Earth-616.

Like this? Let us know!
Retrieved from "https://marvel.fandom.com/wiki/Illyana_Rasputin_(Earth-TRN414)?oldid=6108940"
Community content is available under CC-BY-SA unless otherwise noted.