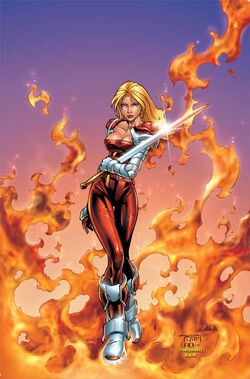 Magik was a teenager and wielded a Soulsword and possessed mutant abilities.

Magik was told by the Timebroker that she had become unhinged from time and that she had to correct problems in other dimensions otherwise in her own reality, she would kill her entire family. She replaced Blink in the Exiles. Magik, not wanting this fate and also wanting to return home as soon as possible, was ruthless and coldhearted and resorted to completing the Exiles missions at any cost. This did not make her very popular among her teammates.[citation needed]

On their first mission together the Exiles found themselves on a world where Japan was under attack from Moses Magnum and Namorita. In order to complete their mission they were supposed to kill the Avengers. The group was horrified and believed letting Magnum murder everyone in Japan and killing the Avengers was against their morals and attempted to save the locals while Magik volunteered to tell the Avengers what was going on. Magik, however, had other plans in mind: Upon their arrival, Magik killed that realities Power Man, Iron Fist, Scorpion, Black Widow, Black Knight and Colossus so as to complete the mission. The other Exiles were not impressed with Illyana.[citation needed]

Their next mission found them in the prime Universe, where the team had to prevent Carter Ghazikhanian, and Nicholas Gleason from being killed by Havok who had been taken over by the mind of an evil version of himself from an alternate universe. When the Exiles arrived in this reality, Gleason had mortally injured Havok & his evil consciousness had taken control and was attempting to kill Gleason and Carter. The Exiles arrived and tried to stop Havok but the Juggernaut, not understanding the situation, thought it was an attack being made on the X-Men. When it was realized that Havok was evil, Carter was injured and his mother - Nurse Anne - suggested that one solution to healing Carter is to use some of Archangel's blood. The Exiles sent Magik and Sunfire to find Archangel, who was at the remains of the Lobo Tech building with Iceman. When the two X-Men were not quick enough to understand the situation, Magik made an attempt to take Warren's blood by force, but found herself outmatched and was swiftly knocked unconscious. Archangel took possession of Magik's soul sword, however when she later regained consciousness and the mission was completed Magik made herself a new one.[citation needed]

At the end of their next mission to stop the vampire king Captain America and his Avengers, the Exiles were tricked by that realities Union Jack who was the true vampire king, and used a magic spell to disrupt the Exiles teleportation and sent each member off to various realities for different periods of time. Magik found herself dumped in an ocean for a couple of hours before being brought back to the Timebrokers base.[citation needed]

The next mission found the group witnessing the birth of the Fantastic Four of the reality they presently were in. Their mission was to make sure nobody die. Illyana protected the group from cosmic rays with a shield spell, and assisted in defending New York City from a rampaging Thing and later her teammate Mimic who was under the control of a Brood embryo he picked up from another reality. During this mission Sunfire was killed and her replacement was Blink.[citation needed]

The group's next mission was to a world where they had to fight the rogue group of other time travelers Weapon X and only six of the members from either team could continue on. When Morph freaked out at Mimic over Sunfire's death, Magik went after him and the two confided in one another. Magik went on to tell Morph that if she didn't do the Timebroker's bidding she'd be destined to kill her entire family, and admitted that she was scared and homesick. She promised Morph her co-operation.[citation needed]

However, when the group teamed up with Weapon X's disposed leader, Gambit began their strike on the evil Hyperion and Magik betrayed her teammates by mortally wounding Sasquatch and then telling Hyperion what the mission was. After being told that only six members from either team was to move on, Hyperion decided to test this theory by snapping Magik's neck. When no new Exile or Weapon X member showed up, Hyperion was determined to destroy the rest of the Exiles.[citation needed]

Magik's body is currently stored within the "Crystal Palace" located outside of time and space and is under the care of the Time Breakers. Her fate - and if she can be brought back to life - is yet to be determined.[citation needed]

Illyana could create 'stepping discs' that allowed her to teleport by going through Limbo. She also seemed to have a natural affinity to magic. She was a very powerful sorceress and ruled Limbo as Sorceress Supreme.[citation needed]

Highly skilled in the black magic of Limbo. Illyana could use her Soulsword to deflect magic, harm intangible beings, steal souls and purge the soul of another being if they were possessed. It would also form protective armor. She also had the ability to summon her Soulsword to her, or summon a new Soulsword altogether.

Like this? Let us know!
Retrieved from "https://marvel.fandom.com/wiki/Illyana_Rasputina_(Earth-4210)?oldid=6118861"
Community content is available under CC-BY-SA unless otherwise noted.