Appearing in "Or Is He Both"

Synopsis for "Or Is He Both"

Bruce Banner lingers at a Roxxon gas station in Arizona. A young girl named Sandy Brockhurst enters to buy snacks for a road trip, followed by another man, Tommy Hill. Hill pulls a gun on the cashier and demands he open the register. Frightened, Sandy drops a bottle of pop, causing the robber to panic and shoot her through the chest, killing her. Banner starts to get angry, but he too is shot and killed. The Hill then kills the cashier and makes off with the register.

Hours later, after the sun sets, Banner's corpse begins to transform in the county morgue.

Across town at an abandoned housing development, Hill meets with members of the Dogs of Hell motorcycle club where he tearfully recounts what he did. Unmoved, Joe, the Dogs leader, asks how much money he got, and tells Hill that with the hundred he stole, he can start paying back the two hundred he was lent. After receiving half his payment, Joe sends Hill out to get the rest. Joe tells Hill that he's weak, and that someone bigger will always come along. At that moment, a loud boom is heard outside, knocking the power out. Joe sends his men out to investigate but they're attacked by an unseen presence. Joe has the remaining Dogs to line up on the door and shoot at anything that tries to come in. Suddenly, a pair of giant, green hands crash through the wall.

Hill attempts to flee to the sound of gunfire and screams, but drops the keys to his car. All of a sudden, the noise stops, and Hill is alone. Slowly turning around, Hill comes face to face with the Hulk, who tells Hill the name of the girl he killed and her age: twelve years old. Hulk asks how the gun feels in Hill's hand and if Hill ever wondered what it would be like to unleash the power of such a weapon on someone who deserved it. Hill begins begging for his life and telling the Hulk he has a daughter himself. Hulk proceeds to brutalize Hill, breaking or crushing almost every bone in his body before leaving him in a crater in the parking lot of a hospital.

The next day, Arizona Herald reporter Jackie McGee interviews detective Gloria Mayes. Mayes states that the assailant that attacked the Dogs of Hell is presently unknown to the authorities, but that he was big and green. McGee speculates that it could've been another gamma mutate because Bruce Banner, at least as far as the public knows, is dead. Mayes posits that Banner did die, and that he can die, but the Hulk can't.[Continuity 1] Mcgee then runs off to place a call to her editor.

Meanwhile in a motel bathroom, Banner asks the green face in the mirror if he's a bad person.

HORROR HAS A NAME.

You’d never notice the man. He doesn’t like to be noticed. He’s quiet. Calm. Never complains. If someone were to walk up and shoot him in the head... all he’d do is die.

Until night falls. And someone else gets up again.

The man’s name is Banner.

The horror is THE IMMORTAL HULK. 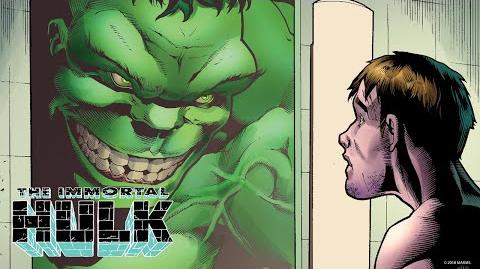 THE IMMORTAL HULK 1! Behind the Scenes

Retrieved from "https://marvel.fandom.com/wiki/Immortal_Hulk_Vol_1_1?oldid=5444091"
Community content is available under CC-BY-SA unless otherwise noted.