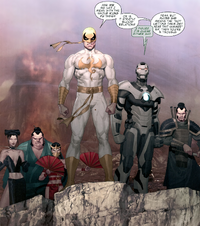 Base of Operations
Heart of Heaven
Affiliations

Origin
The Seven Capitals of Heaven

The champions of the Seven Capital Cities of Heaven, each are skilled in martial arts and able to manipulate Chi energy in various ways.[1] In the Heart of Heaven they battle each other as representatives of their cities in the Tournament of the Heavenly Cities held every 88 years when their cities merge.[2] The original Immortal Weapons used their Chi energy to open the gateway to the Eighth City to trap the evil of the world, Iron Fist (Quan Yaozu) stayed behind to lock the gates trapping him inside.[3]

In the 1920's the cities merged, but one of the Immortal Weapon; Iron Fist (Orson Randall) refused to fight in the tournament, having been changed by seeing too much blood and violence in his time out of the city. When confronted by his would be opponents, attempting to strip him of his station, he lashed out, killing the Crane Champion of K'un-Zi. The Crane Mother swore revenge on the Iron Fist, as she could not produce another warrior for another 300 years.[1]

The cities merged again and the the warriors were all called by to compete.[2] Davos powers were restored by the Crane Mother in exchange for becoming the Champion of the mystical land of K'un-Zi.[1] Each would face each other in various arena's.[1] He revealed that he now was known as the Steel Phoenix.[4] During his match with Tiger's Beautiful Daughter, he beats the girl soundly and she is about to yield, but Davos wanted her death not her submission. His left hand was cut off by her war fan but it did not stop him from defeating her and demonstrating his new powers. Lei Kung interrupts the fight and stops his son from killing the girl.[5][6] Steel Phoenix was defeated by John Aman the Prince of Orphans. After the tournament had ended, he was able to rejoice for a while and even listen to the other Immortal Weapons' stories but it was short lived when John Amon revealed to them the Yu-Ti's activities and intentions.[7]

Later, after saving the Celestial Cities from a Hydra plot to destroy them, he came to New York with Iron Fist like the other Weapons, where he fought with the Iron Fist against Ch'i-Lin, a mystic beast that kills the Iron Fist on his 33rd birthday and uses his heart to gain access to the dragon's egg, which he attempts to consume. At the Rand Corporation, and looked into Xaos learning he was descended from the Lightning Lords of Nepal.[8] They helped Iron Fist against Zhou Cheng , the host of Ch'i-Lin.[9] At Cheng's penthouse apartment they find a partial map to the Eighth City. But were nearly killed by a bomb.[10] At the gates of the Eighth City Weapons focused their chi energies to open the gateway. Weakened through the process they were unable to fight off a group of monstrous creatures. They are brought before their master Changming. They were forced into gladiatorial combat and only rescued on the brink of death.[3] The only way they could communicate with each other is through Morse code.[11] The witnessed a fight between Danny and Changming claimed was the first Iron Fist, Quan Yaozu Tiger's Beautiful Daughter escaped and freed the others. They then attempted to escape[12] Working together they open the gateway, but was Changming's plan all along. Working together they are able to escape trapping the creatures in the Eighth City.[13]

They helped battle the mutated citizens of Manhattan during the Spider-Island outbreak.[15] However the Bride of Nine Spiders turned against her allies attacked and kidnapped her teammates. When Shang-Chi is tried to figure out what his recurring dream means, he learned from Silver Sable that she has found possible locations in Manhattan for Bride of Nine Spider's lair.[16] Although Shang-Chi defeated Bride of Nine Spiders and freed Iron Fist, he discovered that the person who was responsible is the demon Ai Apaec who wanted to feed off the Immortal Weapons. As Shang-Chi confronted Ai Apeac, Iron Fist desperately rushed to free the other Immortal Weapons. Shang-Chi mutated into a spider during the battle, but Iron Fist uses his Chi force to cure Shang-Chi, leaving Iron Fist weakened. After Iron Fist and the rest of the Immortal Weapons are evacuated, Shang-Chi collapses the hide-out on top of Ai Apaec.[17]

Retrieved from "https://marvel.fandom.com/wiki/Immortal_Weapons_(Earth-616)?oldid=5830987"
Community content is available under CC-BY-SA unless otherwise noted.