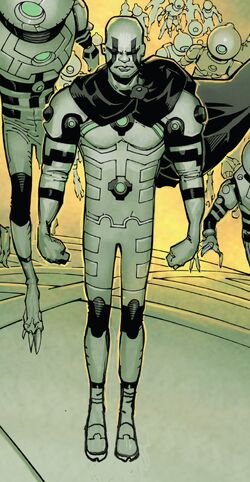 Do you feel that? That is the strength of science. Since I was orphaned as a child, I have devoted myself solely to the study of that sacred power. I learned to channel the white-hot fire of the supernova. The speed of the comet. The quantum might of the supermassive black hole. I baptized myself in the waters of super-science so I might be reborn. Reborn as the cure for cancer. The cancer that is magic. The disease that is you, Doctor Strange.

The man who would become the Imperator lived in a dimension where Shuma-Gorath was worshipped as a deity. His parents, Hieronymus and Abbadona Hellgore were prosecuted by the Blood Monks, Shuma-Gorarth's worshippers, for practicing science and refusing to devote their lives to magic.

The Hellgores created a ship, but the Blood Monks caught up with them before they could escape. Both of them sacrificed their lives to protect their son, sending him away with nothing but the Eyebots as companions.[2]

As an adult, Imperator was fueled by the death of his parents to embark on a crusade to hunt down and kill magic users in different dimensions as the leader of the Empirikul,[3] claiming that magic was a cancer to the universe.[2] Some of their victims included Ice Duchess, Crimson Gypsy, Dr. Warlock, and Magister Szandor Sozo.[3]

When they reached the dimension of Doctor Strange, the Empirikul assaulted several magical landmarks of the Earth until they reached the strongest of them all, Strange's Sanctum Sanctorum.[4] The Imperator confronted Doctor Strange himself and defeated him even after the sorcerer had siphoned all of Earth's magic to empower himself.[5] The most prominent magic users of this dimension were defeated and brought to the front of the Sanctum Sanctorum to be sacrificed. However, old mage Monako interfered and teleported Strange and his colleagues away to safety at the cost of his own life.[2]

The Empirikul razed the Sanctum Sanctorun and searched the Earth for the sorcers while Imperator rested in their moterhsip. When he returned, Imperator confronted the threat of the Sanctum none of his minions had managed to combat, the so-called Thing in the Cellar. While he was battling it, Doctor Strange and the other sorcerers arrived, armed with several items which contained the last traces of magic in the world.[6]

After being weakened and blinded by the milled powder of the Ancient One's skull, Imperator fell to the combined power of Doctor Strange and The Thing in the Cellar. He was imprisoned in the Sanctum Sanctorum afterwards, and forced to become the new Thing in the Cellar.[7]

The Imperator had used super-science to give himself laser vision, and more importantly the ability to disrupt magic. His eyes glow green and can be used either as a concussive blast or to start green glowing fires. As well as incredible endurance against powerful attacks from not only Doctor Strange but also Mister Misery.

He also has built an army which forms the rest of the Empirikul. This includes the robotic Eyebots, which served his parents before him and carry electric pitchforks which also serve as personal teleport devices, and Witchfinder Wolves, who share their master's laser vision.

Despite his hatred against magic and the ability to disrupt it, the Imperator however is still weak against magic and takes heavy damage from it. As Doctor Strange would find out blinding and crippling him with magic dust from the Ancient One.

Recharge: The Imperator needs to regularly recharge in his mothership.[6]

Like this? Let us know!
Retrieved from "https://marvel.fandom.com/wiki/Imperator_(Earth-616)?oldid=5832431"
Community content is available under CC-BY-SA unless otherwise noted.