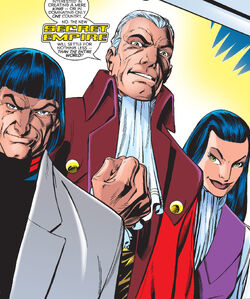 The Imperial Forces were an organization of terrorists who were seeking to destroy the US government and replace it with a new class system.[1] In order to achieve this, they created so-called Madbombs which caused people to go insane and attack each other. The largest Madbomb, "Big Daddy" was set to go off in time for the bicentennial celebration, effecting the entire United States.[2]

Within the organization people were subjected to various experiments and brainwashing techniques to ensure their continued obedience to the Elite,[3] as well as participating in deadly gladiatorial games.[4]

Their plot was foiled by Captain America and the Falcon and the Madbombs destroyed.[5]

Retrieved from "https://marvel.fandom.com/wiki/Imperial_Forces_(Earth-616)?oldid=5597839"
Community content is available under CC-BY-SA unless otherwise noted.