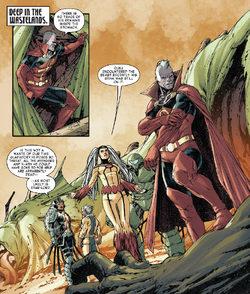 The Imperial Guard transferred their entire squadron after the Universal Church of Truth conquered the Shi'ar Empire. The Guard now under the leadership of the Church were assigned to capture former Spartax Empire Emperor Quill and the rest of the Guardians of the Galaxy who have traveled to Earth in order to look for an ancient artifact.[2]

Retrieved from "https://marvel.fandom.com/wiki/Imperial_Guard_(Earth-21923)?oldid=5797011"
Community content is available under CC-BY-SA unless otherwise noted.