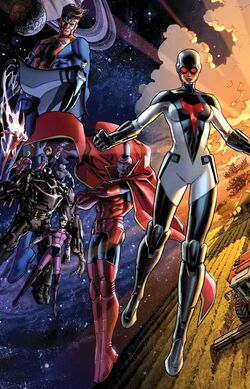 The Imperial Guard was a legion of super-powered champions from throughout the intergalactic Shi'ar Empire who acted as enforcers of Imperial law. The original Imperial Guard was formed to stop Rook'shir, a Shi'ar who became the host of the Phoenix Force. An elite corps of the Guard, dubbed Superguardians, protected the ruling emperor (majestor) or empress (majestrix) and carried out their personal directives. The other divisions, the Borderers, aided the governors of conquered worlds in enforcing Shi'ar law.

When the X-Men sought to rescue the Princess-Majestrix Lilandra from her insane brother, then-Majestor D'Ken, they fought members of the Guard on the planet of the M'kraan Crystal. With the aid of the Starjammers, the X-Men defeated the guard and saved the universe from destruction.[1] The X-Men and the Guard subsequently clashed again after Lilandra had assumed the Shi'ar throne and sought to end the universal threat posed by the Phoenix Force, which had assumed the form of X-Man Jean Grey. This time, the Guard defeated the X-Men, but allowed them to return to Earth after the Phoenix seemingly committed suicide.[2]

Later, the exiled Shi'ar Deathbird manipulated the Guard into believing the X-Men had kidnapped her sister, Lilandra. She was aided by the shifting loyalties of the Guard's Borderers faction. Despite the truth being revealed, Deathbird was able to usurp the throne.[3] She forced the Guard to aid her in a search for the powerful "Phalkon," which was revealed to be the Phoenix Force, then wielded by Rachel Summers. In the ensuing clash with the Starjammers and Rachel's teammates in Excalibur, Deathbird and the Guard were defeated.[4] Later, Deathbird and the Guard were attacked by members of the shapeshifting alien Skrulls. Deathbird was able to escape and enlisted the X-Men's aid in defeating the Skrulls, after which she abdicated the throne to Lilandra;[5] however, the Skrulls were able to incite a war between the Shi'ar and the Kree that spilled over into Earth space, resulting in the Guard clashing with the Avengers. The war ended after the Kree population was decimated, leaving Lilandra with no other choice but to conquer the remaining Kree. The Kree Starforce became an adjunct to the Shi'ar Imperial Guard, and Deathbird was named viceroy of the Kree territories. [6]

During the time when many Earth heroes were believed dead after a battle with the psionic being Onslaught, Lilandra dispatched a cadre of Guardsmen to help protect Earth. There, the Guardsmen uncovered a plot by a militant Kree faction to exact revenge for Earth's involvement in the Kree/Shi'ar war. The Guard ultimately proved triumphant, but not before the Kree's leader, the Supreme Intelligence, was recreated.[7] Soon after, the Guard foiled an assassination attempt on Lilandra by the Kree Ronan and his unwilling agents, the Inhumans' Royal Family.[8]

After Lilandra came under the mental possession of Cassandra Nova, the genetic twin of Charles Xavier who had usurped her brother's body, she was mentally coerced into dispatching the Guard to kill the X-Men. After a pitched battle, the X-Men were able to convince the Guard of the true threat, and together they defeated Nova and freed Lilandra.[9]

The entire 300 member Guard came together to combat the threat of the Skornn.[10]

After Vulcan ascended as Majestor and declared war on the Kree Empire, the Imperial Guard was deployed in the fighting, with their first mission being a show of strength by ambushing the wedding of Ronan the Accuser and the Inhuman princess Crystal. The Guard fought in important battles during the war, but Gladiator was eventually convinced to betray the Majestor and rebelled, eventually being made the new majestor after the deaths of Lilandra and Vulcan, and Deathbird being rendered comatose.[11]

After the war with the Builders, Gladiator vowed to expand the Imperial Guard.[12]

Retrieved from "https://marvel.fandom.com/wiki/Imperial_Guard_(Earth-616)?oldid=5722498"
Community content is available under CC-BY-SA unless otherwise noted.