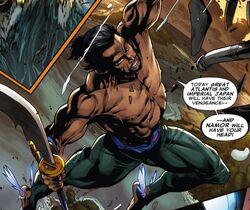 The Imperial Japan was the vindictive regime who led Japan during the World War II.

In order to defeat his enemies, his military leader, Hideki Tojo, allied himself with others authoritarian leaders, the British Fascist Xavier, the Nazi Hitler, the Italian Fascist Mussolini and the Soviet Joseph Stalin.

Once the United States of America were erased, Xavier turn-back on his allies and slain them, probably killing Tojo in the process.

Soon after, Atlantis, having waited for the surface inhabitants to weaken themselves drowned the world, including Japan.

The half-Atlantean/half-Japanese mutant Namor Miyamoto, estranged prince of the Great Atlantis, witnessed the destruction of Tokyo and tried to engage fight with his underwater people, only to witness the destruction of his other nation by Xavier.[1]

For ten years, he tracked down Xavier, who was travelling with a few hundreds Aryan survivors and coloured slaves aboard the HMS Albion. In the end, the multiversal X-Men came to Earth-13410, and found the evil Xavier, unwillingly discovering him to Namor's senses, who came to avenge both Japan and Atlantis. After a confused tripartite fight, Xavier was finally slain by Dazzler and Namor's efforts, and the Atlantean retreated to mourn his losses.[2]

Retrieved from "https://marvel.fandom.com/wiki/Imperial_Japan_(Earth-13410)?oldid=4356850"
Community content is available under CC-BY-SA unless otherwise noted.