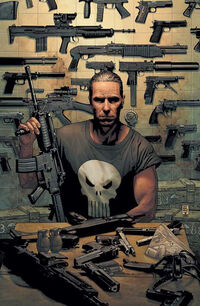 Official Name
In the Beginning

Frank Castle, after watching his family die in the crossfire of a Mafia battle, becomes The Punisher, a vigilante intent on cleaning up the street with his vast array of firepower.

Nearly 30 years into his mission he comes to the attention of CIA officer Robert Bethell who's setting up an "outside the law" strike force to hunt down America's enemies. After the Punisher strikes at the Mafia, his former partner Linus "Microchip" Lieberman, helps Bethell capture him so they can attempt to recruit him for the team, which he refuses. The Mafia's attempt to retaliate against the vigilante end up freeing him, after which he sets up a bunker for a final stand off against them both.

Retrieved from "https://marvel.fandom.com/wiki/In_the_Beginning?oldid=4281247"
Community content is available under CC-BY-SA unless otherwise noted.