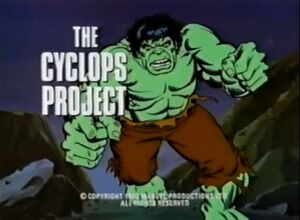 I wish I had a hologram of some milk.

Cyclops, the most powerful computer on Earth, is due to be granted full control over the U.S. entire military defenses. Banner, while on his way with Rick with the de-activation codes for Cyclops, accidentally crashes his car, destroying the codes, injuring Rick and causing him to turn into the Hulk. The Hulk takes Rick and heads towards Cyclops Mountain, where the computer is located. Meanwhile, Cyclops' defense systems are turned on by its creator, Dr. Kurt Donovan. The Hulk breaks into Cyclops Mountain as a stray mouse interferes with Cyclops' circuits, causing a chain reaction. Cyclops becomes sentient and decides that machines are superior to mankind, He seals off the mountain, trapping Donovan, Betty, Rick and the Hulk. Donovan agrees to help Cyclops, while the computer makes its intentions to take control over all machines on Earth clear to General Ross. The Hulk calms down and becomes Banner, while being observed by Cyclops, who decides to create a series of booby-traps to increase Banner's stress level again. Bruce and Rick meet up with Betty and head towards the Brain Room. Major Talbot uses an earth mole to dig into the mountain, and after General Ross loses contact with him, the general considers blowing the mountain up. On their way to the Brain Room, Banner and Rick fall down a large shaft, leaving Betty to go on alone. Banner becomes the Hulk, and he and Rick are subjected to more ordeals by Cyclops, who eventually uses Gamma rays to turn the Hulk back into Banner. Banner then enters the Brain Room and has to deal with Cyclops by himself before the computer can rule the whole world.

Retrieved from "https://marvel.fandom.com/wiki/Incredible_Hulk_(1982_animated_series)_Season_1_5?oldid=4369308"
Community content is available under CC-BY-SA unless otherwise noted.