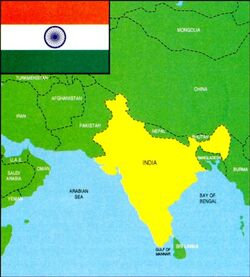 India, officially the Republic of India is a country in South Asia. It's capital city is New Delhi and it's largest city is Mumbai.

Pavitr Prabhakar, a poor Indian boy, lived in a village, but moves to Mumbai with his aunt Maya and uncle Bhim he is given the power of the Spider and used it to fight crime and protect the people of the city.[1] Karn came to his reality to kill him. But Spider-Man (Otto Octavius/"Peter Parker") arrived an saved him.[2] ...[3]

War Machine was sent on a mission to take down the Ten Rings in Mumbai.[4]

Like this? Let us know!
Retrieved from "https://marvel.fandom.com/wiki/India?oldid=5782595"
Community content is available under CC-BY-SA unless otherwise noted.