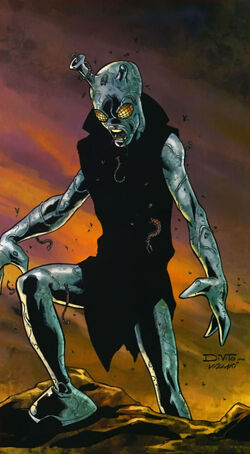 He has regressed to an infantile state. He will not hear us, nor respond to our instructions.

The alien originally known as the Infant Terrible and later the Delinquent was a member of the Elan, a race of aliens who had the ability to alter reality with their minds that originate from the planet Elanis in the Beta Scorpi star-system.[2] Not much is known about their race.[3] The Infant Terrible/Delinquent Elain and both of his parents are the only members of the race that have been seen to date.

While travelling in space, the young Elan got separated from its parents and ended up on the planet Earth where it began running amok in New York City with its reality altering powers. This brought the attention of the heroes known as the Fantastic Four who attacked the creature thinking it was one of their regular menaces and found themselves quickly overwhelmed by its powers. The Elain was later picked up by mobster Big Joe who sought to exploit the alien's abilities for his own personal gain. Meanwhile the Fantastic Four regrouped at their Baxter Building headquarters. Their leader Mister Fantastic then correctly deduced that the Elain was really a child and began working on a means to stop it before it could think to destroy the Earth with its power. While he was doing so, he sent his teammates to find and occupy the alien, whom Reed began referring to as the "Infant Terrible". While the other members of the Fantastic Four battled with the Infant Terrible, Reed used his Ultra-Wave Transmitter to contact the youth's parents who came to Earth and recovered their child before any real harm could be done.[4]

Not long after this, the Infant Terrible returned to Earth once again, this time ending up in the African Republic of Karunda. There the Infant encountered the magician known as Rasmus and used his powers to endow him with real magical powers. However Rasmus could not control his new found powers and ran amok in the jungles until he was stopped by the local jungle adventurer known as Lord Zembla until the Infant Terrible's parents found their child again and recovered him after undoing all his damage.[5]

Apparently away from his homeworld and seeking to pay final respects to his dead parents[7], the alien (now simply referred to as the Elan) was attacked by the Star Stalker who injured the on one of the many worlds the Star Stalker ravaged. The Elan and Star Stalker was found by the herald of Galactus known as Nova. The battle was picked up in the dreams of young Franklin Richards -- son of the Fantastic Four's Mr. Fantastic and Invisible Woman -- and he contacted his friends and teammates in the team of super-powered heroes known as the Power Pack regarding the danger. Aboard their spacecraft, the Smartship Friday, came to Nova's aid. While the other members of the Power Pack helped Nova battle the Star Stalker, Mass-Master restored the Elan to consciousness with his new found healing powers. However the Star Stalker was no match for the Power Pack and Nova, as it absorbed Nova's Power Cosmic and teleported away to it's next intended target -- the planet Earth. [8]

The Elan lapsed back into unconsciousness due to his injuries and was taken aboard the Smartship Friday for examination while the Power Pack return to Earth. Friday determined that the Elan's left antenna was irrepressibly damage and was causing his powers to run out of control threatening to destroy everything in its path. A sudden burst of reality altering energy flared from this injury and struck Franklin Richards, placing him in a coma-like state, necessitating him to be kept alive by the Smartship's systems. While the other members of the Power Pack and Nova battled the Star Stalker in Central Park, the Smartship was watched over by Raymond, a homeless man with flame powers of his own. Franklin soon deduced that the only means to stop the Star Stalker was with the Ultimate Nullifier a weapon in the possession of Galactus and ordered the Smartship to go to him. [10] En route to the Worldship of Galactus, Friday determined that the only way to end the threat of the Elan's out of control powers was to amputate the injured antenna. When Franklin Raymond confronted Galactus, the cosmic being gave them an alternate weapon -- the Elemental Obliterator -- to deal with the Star Stalker. Upon returning to Earth, Franklin was willing to sacrifice his life to use it to destroy the Star Stalker, but the Elan grabbed the weapon from Franklin instead. However, the Power Pack intervened, and their combined powers protected the Elan while the Obliterator destroyed the Star Stalker, saving the Earth in the process.[9]

In the aftermath of the battle, the Elan wanted to return to his homeworld and the Power Pack lent him the Smartship Friday to do so. Raymond accompanied the Elan on his journey only to learn that the alien was returning to a dead world to pay his respects to his deceased parents. After which, the Elan -- having learned how to speak English -- requested to return to Earth to join the Power Pack.[7] En route, their ship was shot down by the Red Ghost who sought to claim Friday himself. the ship crashed into the apartment building that the Power Pack lived in with their parents James and Margaret Power. The Elan recovered Friday's computer core just when the Red Ghost and his Super-Apes attacked.[11] The Elan, taking on the form of super-powered James Power fought back against the Red Ghost and his minions. This ruse proved short lived when the Red Ghost incapacitated the Elan with a ray blast, forcing him to revert back to his natural form. The Red Ghost and his Super-Apes were soon defeated by the Power Pack. After this defeat the Powers decided to try and find a cure for Mass-Master who at the time had transformed into a Kymellian form. In order to facilitate this journey, the Elan used his powers to help the Fantastic Four and the Power Pack to repair the Smartship Friday.[12] The Elan joined the Power Pack first to the Institute of Psychic Research in England. Along the way they all slept and in their dreams they were used as pawns by the dream demon known as Nightmare along with the British super-heroes known as Excalibur. Nightmare was defeated by the institute proved to be no help for Alex.[13] and later the Collar Institute for Psychic Studies in the Caribbean, also a false lead.[14] The Powers finally decided to seek aid from the Kymellians who gave their children powers in the first place and the Elan joined them on this quest.[12] Although the Power Pack eventually cured their brother, by this point the Elan had since parted company with the group.[15]

Many years later Annihilus, ruler of the Negative Zone and his entered the positive matter universe and began invading the Andromeda galaxy in what became known as the Annihilation Wave.[17] Many of those the Annihilation Wave encountered were enslaved and forced into serving Annihilus using hordes of insects that invaded the body and controlled their will. Among those enslaved were the Elan -- now called the Delinquent -- as well as Paibok the Power Skrull and Terrax a former herald of Galactus. On the 212st day of the Annihilation Wave the trio were forced to join Ravenous and his Centurions in battling the resistance on the planet Daedalus 5. During the battle, the Delinquent fought against Drax the Destroyer.[16] Although Drax was more than a match for the Delinquent and defeated him in battle, the resistance fighters were forced to retreat from Daedalus 5 as the world was destroyed by Galactus who had been enslaved and turned into a weapon by the Annihilation Wave.[18]

Following the defeat and surrender of the Annihilation Wave, [19] the control insects that kept the Delinquent, Piabok, and Terrax under the Wave's control suddenly stopped working. Terrax then slew their captors but this destroyed the ship and led them to crash land on the world of New Xeron. The months of being a slave had left the Delinquent nearly insane. The trio soon learned that the world was enslaved by the so-called Space Parasite and they agreed to an appeal by those enslaved by the Parasite to stop him. Terrax slew the Space Parasite and then destroyed New Xeron as well. The Delinquent used his powers to save himself and Paibok and then parted company. The Delinquent was last seen using his powers to create a new ship for himself and Paibok and leaving that area of space for points unknown.[20]

Molecular Matter Manipulation: The Delinquent possesses the psionic ability to manipulate all forms of matter and energy. This means that virtually any conceivable thing The Delinquent wants, can be accomplished.

Known uses of his power include;

This is an Anglicized form of the French term 'enfant terrible', used in the arts (in English) to denote a prodigy and 'game-changer', such as Mozart.

Like this? Let us know!
Retrieved from "https://marvel.fandom.com/wiki/Infant_Terrible_(Earth-616)?oldid=6438674"
Community content is available under CC-BY-SA unless otherwise noted.