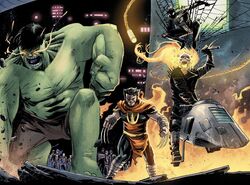 Origin
Bounty hunters from the domain of Limbo

Place of Formation
Somewhere in Limbo

Place of Dissolution
Somewhere in 2099

The Infernal Four, bounty hunters from the domain of Limbo, were hired by God-Emperor Doom to apprehend the Punisher of Earth-27169 for breaking one of his laws. Punisher wasn't operating under his own free will, though. He was possessed by the spirit of his reality's Doctor Strange.

When the Infernal Four confronted Punisher in the domain of 2099, he killed three of them and tried to kill the remaining one, Wolverine, by blowing himself as he preferred death to being exiled to the Shield. Wolverine survived, however. So did Strange. Needing a new body, Strange decided to possess Wolverine's.[1]

Retrieved from "https://marvel.fandom.com/wiki/Infernal_Four_(Earth-91240)?oldid=5756574"
Community content is available under CC-BY-SA unless otherwise noted.