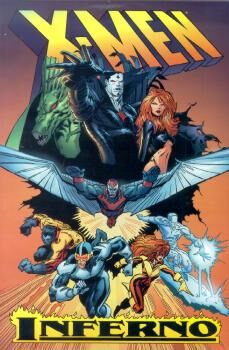 Inferno is an X-teams' event that impacted every other comic whose hero was in or around New York City. There are two separate primary storylines: The New Mutants struggle against S'ym for the soul of Illyana Rasputin, now the Darkchilde, and the X-Men and X-Factor struggle against N'astirh and Madelyne Pryor to regain Nathan Christopher Summers.

Inferno is the first X-book storyline to truly be a crossover, in that the story actually continued from one title to another from month to month (X-Men and X-Factor). (The earlier Mutant Massacre came close for X-Factor with the side story told in Thor between X-Factor comics, but it was mostly treated as a separate side story related to the ongoing events, not integral to the events themselves. There was no crossing over in that event between X-Men and X-Factor titles, both teams just happened to be involved in the same incident in different places).

N'Astirh begins kidnapping mutant babies to power his portal between Earth and Limbo, with opposition from the newly formed X-Terminators team formed by mutant teenagers rescued by X-Factor. The final issue leads directly into the New Mutants portion of the storyline.

Illyana transforms fully into the Darkchilde in a deal with N'astirh to stop S'ym, only to find that N'astirh has tricked her into opening a portal between Limbo and Earth. The demons want to make the portal permanent using babies, and the New Mutants, with the help of the X-Terminators, set out to rescue the babies and Illyana.

Sinister and N'astirh independently manipulate Madelyne Pryor, both for their own ends. Madelyne makes a deal with N'astirh to get her son back from Sinister, and becomes the Goblin Queen. The transformation, combined with Sinister's revelations about her origins, and the events in her life (notably her abandonment by Scott Summers) all contrive to force her further into N'astirh's arms as she vows to sacrifice her son for the demon's plan. The X-Men and X-Factor clash over Madelyne - X-Factor mostly concerned for the child and the X-Men mostly concerned for Madelyne, whom they see as wronged by Scott. Into the confusion Sinister throws the Marauders. Everything comes to a head when Jean Grey fights and defeats Madelyne Pryor, rescuing Nathan. At the end, the combined teams fight Sinister and the mansion is destroyed.

Hearing Nathan's cry of distress, Phoenix tears across the Atlantic and the rest of Excalibur follows bewilderedly. Phoenix is taken out of the contest early by magic, however, and Excalibur mostly battles some demons without actually taking any important part in the event.

While none of the rest of the heroes in New York City involve themselves directly in the event, they are still affected by the events of the story in their own way. Numerous major events take place during this time, amongst them:

Retrieved from "https://marvel.fandom.com/wiki/Inferno_(Event)?oldid=5776725"
Community content is available under CC-BY-SA unless otherwise noted.