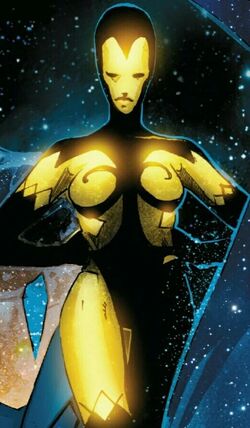 Infinity was the embodiment of the Seventh Cosmos and sixth Multiverse alongside Eternity, with whom she was one.[1]

During the Eternity War, Infinity was summoned by Eternity alongside her predecessors to help him defeat the First Firmament, who sought to reclaim his position as everything that is. After the First Firmament was restrained, the cosmoses took him to the Next Place, where they planned to heal him.[1]

Like this? Let us know!
Retrieved from "https://marvel.fandom.com/wiki/Infinity_(Multiverse)?oldid=5581347"
Community content is available under CC-BY-SA unless otherwise noted.