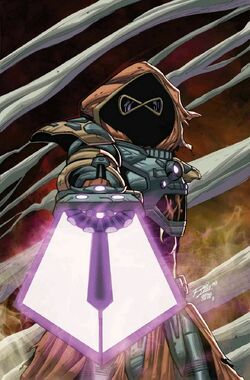 The Infinity Blade was a weapon commissioned by Gamora from a dwarf of Nidavellir she had kidnapped.[2] The sword was empowered by the Power Stone,[3] and it was seemingly based on a design created by Thanos.[4]

Gamora wielded the Infinity Blade when she adopted the identity of Requiem.[4] It was shattered when Gamora struck Emma Frost with it since she was holding a duplicate of the Power Stone herself, and her telepathic abilities allowed her to exploit the Power Stone to its full potential.[1]

This may be a callback to the infinity sword from the super hero squad show.

Like this? Let us know!
Retrieved from "https://marvel.fandom.com/wiki/Infinity_Blade?oldid=6430367"
Community content is available under CC-BY-SA unless otherwise noted.