Marvel Database
Register
Don't have an account?
Sign In
Advertisement
in: Events, 2018 Event Debuts, Guardians of the Galaxy Storylines

The Gathering of the Infinity Stones[1]

Prior to the destruction of the entire Multiverse as a consequence of the incursions, the Infinity Gems of the Marvel Universe were destroyed.[2][3] Once all of reality was restored,[4] the Infinity Gems started to re-emerge.

Both the Space and Mind Stones manifested on Earth, the former was initially procured by Logan,[5] but he later left it in the hands of Black Widow for safekeeping,[6] while the latter fell in the hands of small-time crook Turk Barrett, who used its power for his own gain.[7] A giant-sized Power Stone resurfaced in the desert planet of Xitaung and became guarded by the Nova Corps and the Guardians of the Galaxy.[8] The Reality Stone appeared in an adjacent reality,[9] from where it was retrieved by Captain Marvel. The Time Stone turned out to be responsible for the return of the destroyed planet Sakaar, and was unearthed by the Super-Skrull from its core with the objective to find the other gems and return the glory of the Skrull Empire. The Soul Gem was obtained by Magus on the surface of Ego the Living Planet, but was taken from his hands by Ultron / Hank Pym, whose intention was to assemble the Infinity Gauntlet and rewrite the universe.[7]

The Nova Corps outpost in Xitaung was eventually besieged concurrently by the Fraternity of Raptors and the Chitauri warlord Warbringer. After freeing the planet Telferina from a Flora colossi invasion led by the maddened Gardener,[6] the Guardians of the Galaxy joined the fight against the invaders in Xitaung.[10] After the Nova Corps decided to retreat, Rich Rider figured out thanks to his brother Robbie that a one could impose their cognition over reality to alter the size of the Power Stone. Using this principle, Star-Lord reduced it to the size of a hand. Since the Power Stone acted as an anchor that prevented Xitaung's destruction, the planet started crumbling immediatelly. After using the Power Stone to destroy the Chitauri, the Guardians and Nova escaped from the doomed planet.[11]

Possessing knowledge of the calamity that awaited if the Infinity Stones were gathered again, Kang the Conqueror abducted Adam Warlock and convinced him to accept his help in securing the Soul Gem in exchange for the Time Stone. Adam was sent back in time to receive council from Rama-Tut,[12] and joined the hunt for the Gem a millenia later on present day. When he reached the planet of Saiph, he found that the world had been conquered by Ultron using the Soul Gem, and one of his victims affected by the Ultron Virus was the Silver Surfer.[10] After Warlock healed him of Ultron's infection, the Silver Surfer sought out Galactus' help to convince him to destroy Saiph, since Ultron planned to use it as the launching point to spread the Ultron Virus on a cosmic scale.[11] Galactus initially refused due to the consequence of destroying the planet, but eventually agreed. Saiph and the rockets transporting the Ultron Virus were destroyed before they could leave the planet. Ultron attempted to escape but was wounded, and the Soul Gem was taken by Warlock. As a result of destroying Saiph, Galactus' hunger returned. In exchange for Galactus' help, Silver Surfer was forced to serve as his herald once again.

In the meantime, the Guardians and the Nova Corps regrouped in Knowhere. Drax the Destroyer took off with the Power Stone while Nova set out to save his brother from the Raptors. Star-Lord was summoned by the Collector and Grandmaster, who had found a Reality Stone. However, it turned out it wasn't the Reality Stone from their universe, but from an adjacent reality. The Captain Marvel from the world that Reality Stone belonged to appeared it to retrieve it, and Star-Lord handed it over since it was useless outside its native universe.[13] The Guardians escaped to Oblitus, but they were intercepted by Warlock and Kang. Gamora attempted to take the Soul Stone from Warlock, and a fight broke out. Drax managed to hold onto the stone, but learned that Soulworld was corrupted, so he struck Gamora to prevent her from opening it, and departed with Warlock and Kang. The rest of the Guardians refused to help Gamora pursue Kang, and she went on her own.[14]

In the middle of a cosmic journey, Doctor Strange stumbled into the Time Stone and stole it from the Super-Skrull.[15] He additionally tracked down the Mind Stone, and tried to convince Turk Barrett to give it up, but he managed to evade him. When Black Widow sought Strange's help to dispose of the Space Stone, he refused take it since he warned against keeping two stones in close proximity. Using magic, Strange communicated with the wielders of each stone and requested a parley to reform the Infinity Watch, arguing it was critical the six stones were properly safeguarded to stave off calamity. With one such threat being Thanos.[14] 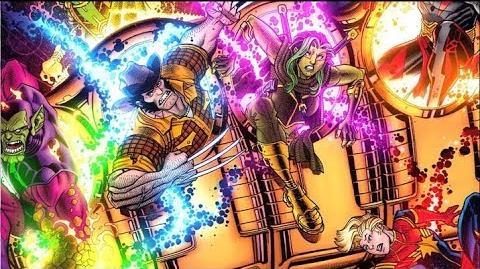