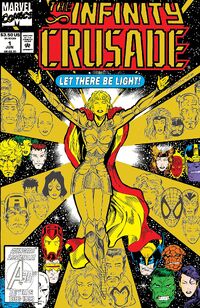 Infinity Crusade started when the Goddess gathering 30 Cosmic Containment Units and merging them into the Cosmic Egg, an artifact capable of fulfilling her wishes. The Goddess uses the Cosmic Egg to create a planet, Paradise Omega, as her base of operations. The Goddess then recruited many superheroes to her side. The heroes she chose were either religious, spiritual or had a (near-)death experience. The Goddess told the heroes that she wished to banish all evil from the universe and that the heroes needed to defend her while she was meditating within the Cosmic Egg. The heroes swore allegiance to the Goddess, some seemingly brainwashed, though a few heroes had their doubts. Moondragon became the leader of the Goddess' troops.

Meanwhile Mister Fantastic, the Vision and Iron Man investigate the disappearance of their friends and allies and the sudden conversion of all criminals on Earth. When Aurora, one of the superheroes left on Earth, goes through her personality change to the religious Jeanne-Marie Beaubier, she also was called by the Goddess. The three superheroes followed Aurora and discovered the Goddess and Planet Omega. Moondragon and her allies turned out to be hostile and the trio retreated. Back on Earth, the gathered superheroes called a meeting to decide what to do about the Goddess. An attempt by Professor X to contact Moondragon ended with a telepathic attack, leaving him in a coma and the heroes of Earth determined to stop the Goddess.

At the same time, Adam Warlock had discovered the truth about the Goddess; she was his "good" side, just like the Magus had been his "evil" side. Adam Warlock saved Thanos, who had been attacked by the Goddess. Mephisto appeared to them and offered his knowledge in exchange for one of the Goddess' Cosmic Containment Units. Armed with Mephisto's information, Adam Warlock and Thanos planned to defeat the Goddess. Thanos sought contact with Earth's heroes and assisted them in their assault on Paradise Omega. He also recruited the Silver Surfer, who had been one of the Goddess' followers, but turned against her when he noticed that he was being manipulated.

The Silver Surfer absorbed dangerous amounts of energy from a sun and sped towards the Paradise Omega at speeds even uncontrollable for himself. He had moved slightly off course, but Hulk and Drax used their phenomenal strength to redirect his course, and he and subsequently destroyed Paradise Omega's defense system, allowing the heroes of Earth to pass. Thor, one of the Goddess' followers, destroyed their spacecrafts, forcing the heroes to disembark in escape pods. Landing in various spots on Paradise Omega, the heroes rushed to their goals. They were confronted with the brainwashed heroes and multiple fights broke out. The Goddess' followers were especially brutal and almost killed some of the non-converted.

Every possible dimension is affected, including the one that the very reader of the comic book is in. One page of issue 6 shows the point of view of the reader actually reading said page, then bursting into flames. The comic book is shown aflame also.

However, it was all just a trick crafted by Warlock, as he has caused the illusion of the destruction of all existence moments before it would have actually happened. It is later explained that those affected perceived the moment as a passing flight of fancy, a momentary nightmare or other rationalizations.

Thanos, Warlock and a restored Professor X work together against the Goddess and finally absorb her soul into the Soulgem. Thanos returns the heroes to Earth and destroyed the Cosmic Egg and Paradise Omega, but takes a single Cosmic Containment Unit for Mephisto. Many of Earth's heroes blame Adam Warlock for the Goddess' actions. Meanwhile Thanos hands Mephisto his payment, but tricks the devil by giving him a non-functional Cosmic Containment Unit.

Retrieved from "https://marvel.fandom.com/wiki/Infinity_Crusade?oldid=5059163"
Community content is available under CC-BY-SA unless otherwise noted.