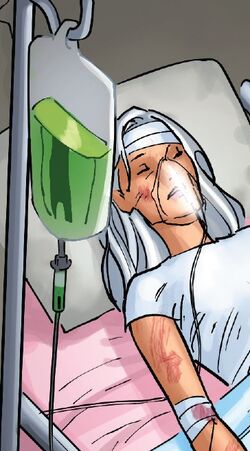 The Forever Compound is an alchemical serum produced by the Brotherhood of the Shield. It is a diluted form of the Elixir of Life developed by Sir Isaac Newton in 1652.

While it still retains the life-prolonging properties of its parent elixir, it doesn’t keep any of the other properties. In particular, it does not prevent the mind or body of the person injected with it from decaying.

Newton administered it to Nostradamus in 1652, which kept the seer alive and also kept his prophetic gifts intact until Nostradamus took the Elixir of Immortality three hundred years later.[1]

Nick Fury was seriously wounded in France during World War II. He was saved in part due to Professor Sternberg's Infinity Formula. Fury must be inoculated by the serum every year or he will age dramatically. Since Fury's first inoculation, the Colonel had to pay a blackmail price to Sternberg every year to acquire the serum.

The Infinity Formula substantially slowed his aging process, and Fury was thrust with a double edged sword: although his life was saved, the consequences of the Infinity Formula would haunt him throughout his life as he would see many friends age and die, as well as become the target of various villains seeking his secret. Dr. Sternberg himself was not immune to taking advantage of Fury's delicate situation, basically holding Fury's life for ransom starting in 1946, every year through 1976 by charging Fury a high fee for more of the serum.

However, Steel Harris killed the Professor and took possession of the serum. He decided to blackmail Fury even further by making demands to become immersed in SHIELD and other National Security briefings. Nick found Harris in Las Vegas and battled him and his minions. Even though the Colonel defeats Harris and his thugs, the future indeed looked bleak for Fury as he began to incredibly age (from not receiving an inoculation of the Infinity Formula). However, the timely intervention of Val de Fontaine saved the day. Fontaine had previously liberated the serum from its captors and inoculated Fury just in time to save his life.[2]

Nick Fury's aging process was incredibly slowed by taking regular doses but now he didn't take anymore and his son Nick Fury, Jr. inherited the effects.[3] However, Fury rapidly aged[4] after using up the Infinity Formula in his blood via blood transfusions to save the life of Winter Soldier.[5]

Nick Furious retained his youth by using this secret chemical. He gave his friend Some-Dumb Dougan a copy of the formula so that Dougan could retain his youth too; otherwise Dougan would have insisted on being near Furious during the latter's retirement to see if he could be still young as a side effect.[6] An A.I.M. agent impersonated a redheaded female tourist in order to intrude on a guided visit to SHEESH and inconspicuously tried to question Furious about the catalyzer of the formula, but Furious refused to answer.[7]

Retrieved from "https://marvel.fandom.com/wiki/Infinity_Formula?oldid=5673793"
Community content is available under CC-BY-SA unless otherwise noted.