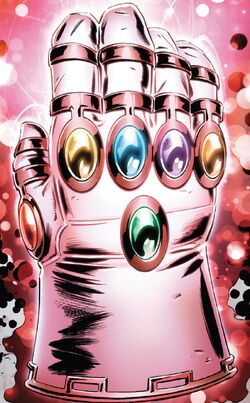 The Infinity Gauntlet is one of the most powerful objects in the Universe. It was designed to hold six of the soul gems, better known as the Infinity Gems.[4] When used in combination their already impressive powers make the wearer able to do anything they want.[5]

It was gathered by the Mad Titan Thanos as he took the gems from the Elders of the Universe that had originally carried them. He hoped to appease his love to the entity known as Death, Thanos used the Infinity Gauntlet with all of the Infinity Gems to remove half of the population of the Universe.[5]

After Adam Warlock was able to gather some of the surviving heroes to oppose Thanos, Nebula briefly stole the Gauntlet from Thanos when he ascended to a level that he abandoned his body, but Warlock, Thanos and the others were able to force the Gauntlet away from Nebula so that Warlock could retrieve it for himself [6]. However, the Living Tribunal declared that the gems were too dangerous to use together, and the Gauntlet was disassembled and the gems scattered among others.[citation needed] When faced with the threat of the Magus, Warlock was forced to apparently reassemble the gauntlet,[citation needed] but, aware that the Magus sought the gauntlet for himself, they tricked the Magus by replacing the Reality Gem on this gauntlet with a powerless replica, creating a gap in the Magus's power that his enemies would exploit [7]. Although the Tribunal restored his old rule that the gems couldn't be used in unison once the crisis was over,[citation needed] Thanos' later machinations eventually led to Living Tribunal rescinding this restriction.[citation needed]

Sometime later, Mister Fantastic revealed to his fellow teammates of the secret group called the Illuminati that he had been collecting the Infinity Gems, and hoped to collect the remaining gems with the aid of the other Illuminati members. Despite a general apprehension, the group managed to acquire all six gems. Upon doing so, Mister Fantastic attempted to will the gems out of existence, but he was unable to do so. Faced with this failure, and a reprimand from Uatu, the Watcher, he made the controversial decision to give each Illuminati member one gem to hide so that they would never be combined and used again [8].

After the Siege of Asgard; the Hood tried to get all the Gems, starting by taking the Reality Gem from the Himalayas (which was kept there by Illuminati member Black Bolt), the Power Gem from the Baxter Building (kept by Mister Fantastic), and battled the Red Hulk with it.[9] Red Hulk warned the Avengers about it, and Iron Man talked with the Illuminati about this. The Hood managed to get the Space and Time Gems, while he lost the Power Gem at the hand of Red Hulk, Namor, and Thor.[citation needed] After taking the Mind Gem from the ruins of the X-Mansion,[citation needed] the Hood traveled to the Astral Plane, where he tried to get the Soul Gem, but was finally defeated by the Avengers.[citation needed] Iron Man gathered all the six gems and became the first human to possess and use the Infinity Gauntlet, as he transported the Hood back to Ryker's Island and faked that he made the gauntlet disappear from existence,[10] though he really transported it to the Illuminati's gathering place, where he divided the Gems between his teammates again.[citation needed]

When the Illuminati later faced the threat of the incursions, alternate reality Earths colliding with their own with the result of the extinction of both realities, the Illuminati once again assembled the Infinity Gauntlet.[citation needed] Galactus, the Watcher, and Thanos sensed the assembly of the gauntlet, and Captain America used it to push away the other Earth and prevent the collision. The cost of this however, was the destruction of the gauntlet and the shattering of all gems but the Time Gem.[11]

Infinity Gems: When the Infinity Gauntlet is complete, each stone grants it the following abilities:

Nigh Omnipotence: The Infinity Gauntlet granted virtual/nigh-omnipotence to its wearer.[citation needed] Even the combined powers of beings like Eternity; Watcher; Lord Chaos; Master Order; Mistress Love; Sire Hate; Kronos, the Celestials; Death, and Galactus made up only a small fraction of the Gauntlet's power.[citation needed] The only known beings with power exceeding that of the Gauntlet are the Living Tribunal; God Emperor Doom with the power of the Beyonders and the One-Above-All.[citation needed] When Thanos possessed the gauntlet his anger turned into a wave of energy that at 2% of its full strength caused the west coast of the United States of America and Japan to sink underwater, tidal waves on the east coast of the United States, and caused the Rainbow Bridge to Asgard to shatter, trapping Odin; Zeus, and the other skyfather gods there.[citation needed]

One thing the Infinity Gauntlet cannot do is be used to destroy itself.[citation needed]

Like this? Let us know!
Retrieved from "https://marvel.fandom.com/wiki/Infinity_Gauntlet_(Item)?oldid=6439494"
Community content is available under CC-BY-SA unless otherwise noted.