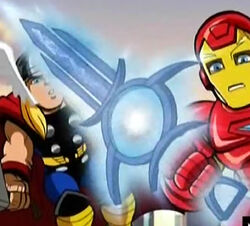 The Infinity Sword is a cosmic weapon which was believed to make its wielder all-powerful. Doctor Doom attempted to use it to conquer the universe, but was attacked by Iron Man, causing the sword to fracture, scattering pieces of itself across the Earth. These pieces, referred to as Infinity Fractals, still held a considerable amount of cosmic power, and reacted unpredictably with anything they came into contact with. Over an extended period of time, heroes and villains battled to collect the Infinity Fractals.[citation needed]

When Galactus attempted to consume Earth, the Infinity Sword was reassembled to drive him away. Doctor Doom attempted to destroy Galactus with the sword, only to find that it was barely powerful enough to draw Galactus' attention. Silver Surfer revealed that the sword could only reach its full power when combined with the Infinity Gauntlet.[citation needed]

Silver Surfer eventually discovered that the sword's power was sufficient to sate Galactus' appetite and agreed to travel with him, using the sword to feed him in order to stop him from consuming more planets.[citation needed]

Over time the sword's power corrupted Silver Surfer's mind, driving him to seek out the other Infinity Gems. Calling himself Dark Surfer, he seized the gauntlet and used it to create chaos throughout the universe.[citation needed]

Dark Surfer was eventually defeated by the Super Hero Squad, and used his power to hide the sword and gauntlet at the edge of the universe. When the Squad arrived, they were ambushed by Doctor Doom, who sought to claim the gauntlet's power to conquer the universe. Amidst the struggle, the sword, gauntlet, and all of the Infinity Gems were destroyed, scattering across the entire universe as Infinity Fractals while also reversing the damage that the Dark Surfer has done.[citation needed]

Like this? Let us know!
Retrieved from "https://marvel.fandom.com/wiki/Infinity_Sword?oldid=6434229"
Community content is available under CC-BY-SA unless otherwise noted.