Loki embarks on a journey to the God Quarry with a librarian from Omnipotence City, Flowa, in order to investigate the desecration of a book with a story involving him. He had found out that none of the stories at Omnipotence City's library show him being the hero, and determined somebody must be behind this occurrence.[2] When he reaches the God Quarry, its guardians, The Coven, burst into flames announcing that "infinity's end is here!" A portal from another universe hurls a counterpart of Loki who is worthy of Mjolnir and possesses the Infinity Stones of his reality. Loki's counterpart warns him that he won't be able to breach into the "original universe" without them, or have any hopes of winning against Requiem and Devondra. Loki's counterpart returns to his reality, where he's slain by Soul-Eater. Loki sets out to find the Infinity Stones.

In the meantime, Gamora meets up with Star-Lord and switches the Power Stone in his possession with a fake.[1] Donning a special masked armor forged by a dwarf of Nidavellir and a sword with the Power Stone encrusted on its hilt,[3] Gamora murders Thanos before he can set out to find the Infinity Stones.[2] After killing her foster father, Gamora is plagued by an apparition of Thanos.[4]

On Earth, Doctor Strange convenes the Infinity Watch to arrange the safekeeping of the Infinity Stones. Strange attempts to observe Thanos' whereabouts and is surprised to find him dead. Gamora arrives and demands the Infinity Stones, and simply identifies herself as Requiem. During the ensuing fight, her true identity is revealed. Surprised by Gamora's uncharacteristic behavior, Star-Lord tries to reason with her.[1] He's saved from death by Doctor Strange, using the Time Stone. Doctor Strange then teleports to another dimension with Turk Barrett and convinces him to hand over the Mind Stone. Back in Central Park, Captain Marvel flies away with Gamora to take her down, but Gamora steals the Reality Stone from her and uses it to trick the heroes into believing she's Captain Marvel and Captain Marvel is Gamora. Captain America notices the deception after Doctor Strange restrains Captain Marvel, but Gamora uses the Reality Stone to partially fuse him and Doctor Strange together, stealing both the Time and Mind Stones. Gamora decapitates Warlock, and the heroes try to race to the Soul Gem. However, Gamora uses the Time Stone to freeze time, and steals the Space Stone from Black Widow in the process. Hesitant, Gamora opens a portal to Soul World and reunites with the part of herself trapped within, becoming whole again. Gamora then sets out to rebalance the Soul Gem, declaring that Devondra must feed. Loki approaches her from behind with Flowa, and offers Gamora his counsel.[4]

Gamora reads Loki's mind and learns of his visit to the God Quarry sets out to investigate the boundary at the Quarry of Creation since she can't see beyond that place. As a means to neutralize any possible opposition and to feed Davondra, the creature at the heart of the Soul Gem, Gamora uses the Infinity Stones to trap all the inhabitants of the universe in a pocket universe called Warp World located inside Soul Gem, additionally merging every person with another, effectively cutting down the number of souls in the universe by half. Gamora's actions unwittingly result in the creation of many particular inhabitants inside Warp World, including Iron Hammer, the combination of Iron Man and Thor; Soldier Supreme, the combination of Doctor Strange and Captain America; Weapon Hex, the combination of the Scarlet Witch and X-23; Arachknight, the combination of Spider-Man and Moon Knight; and Ghost Panther, the combination of Black Panther and Ghost Rider.

Gamora subsequently travels with Flowa to the God Quarry and begins to dig into the Quarry of Creation. She has left Loki trapped inside Warp World, so he tries to enlist the help of Diamond Patch, the amalgam of Wolverine and Emma Frost, to find Adam Warlcok to prevent the doom of both Warp World and the real world.[5] Having deduced that if Gamora has copied the entire universe and installed it into the Soul Gem, Diamond Patch theorizes a set of Infinity Stones must also exist in Soul World. Since he has the knowledge he will one day wield the Phoenix Force, Diamond Patch sends his future self a telepathic message in a bottle, resulting in the Phoenix-empowered Wolverine from The End of Time arriving to help Loki and Diamond Patch. He hands them over the Power Stone, and splits Diamond Patch back into Logan and Emma Frost before leaving. Meanwhile in an adjacent reality, this universe's Captain Marvel and Moondragon confront Requiem and escape to the Prime Marvel Universe after failing to take her down.

Leaving Logan behind, Emma helps Loki recruit other individuals he had deemed uniquely suited to wield an Infinity Stone. When Gamora read Loki's mind before creating Warp World, Loki specifically imagined the people he needed in his journey mashed together so that she would subconsciously create them and unwittingly facilitate their location. These people are Kang and Ms. Marvel, merged into Ms. Kang, and Ant-Man and the Hulk, merged into Little Monster. Using their combined powers, Emma and Loki split them. After assembling the team, Loki finds Adam Warlock and attempts to get his help to escape Soul World, but he insists they need to fight Davondra. Emma rallies numerous merged heroes to help Warlock as the entirety of Warp World becomes infested by manifestations of the creature. One of the heroes that answers Emma's call is a seemingly normal saxophone player who is actually Drax the Destroyer.

In the real world, Gamora finds an impenetrable barrier bellow the Quarry of Creation. She tries to breach out of the universe but she can't, and is soon confronted by the Council of Watchers.[6]

While the warped heroes of Warp World fight Devondra, Loki's team find a set of Infinity Stones that Gamora unwittingly created when she copied the universe into Soul World. Loki divides the stones between his team based on each person's individual talents, since a wielder's mastery over the aspect of a certain Infinity Stone allows them to unlock the full power of another.

The Phyla-Vell and Moondragon from the adjacent universe arrive and confront Gamora for the actions of their universe's requiem. They're soon joined by Loki and his team. They use the Infinity Stones to defeat Gamora, snatching from her several of the Stones from the set in her possession. However, Loki pickpockets Ant-Man and Ms. Marvel, making a complete set of Infinity Stones. He sends Gamora, Phyla-Vell and Moondragon into Soul World and escapes through the barrier in the bottom of the Quarry of Creation. He finds himself in another universe, with Celestials being surrounded by countless of Infinity Stones. In the meantime in Soul World, Arthur Douglas is recruited by Peet (an amalgam of Groot and Star-Lord) to join the battle against Devondra.[7]

Loki confronts the Celestials and is directed to a mirrored surface to see his future. He laughs and, disenchanted, returns to the Quarry of Creation. Having used the power of his set of Infinity Stones to render inert the surplus gems, he hands them over to his former team and leaves with Flowa to Omnipotence City, deducing that it was the actions of his future self, who tried to change the past to prevent himself from breaching out of the universe.

In Warp World, Peet reunites the Guardians of the Galaxy. Loki's team returns to Warp World and Hulk uses the Space Stone to create a black hole to destroy Devondra. Warlock uses the Soul Gem to return the Guardians to normalcy, and splitting Warp World's Arthur Douglas reveals that he had been merged with himself because he possesses two souls, one corresponding to his human self and another to the Destroyer. Warlock directs the stone-wielders to bring back the regular universe, while keeping Warp World intact in a facet of the Soul Gem per the wishes of Soldier Supreme. The heroes start to run out of time, so Arthur and Drax decide to sacrifice themselves, staying in Warp World to hold open a portal so that Warlock and the other heroes can safely return home. When they do, Warlock teleports Gamora someplace she could set on a path of redemption, and she finds herself taking a younger and amnesiac Magus under her wing. Adam then decides to give each Infinity Stone their own soul, giving them the ability to dictate their own destiny. All the stones part away, including the Soul Gem, much to Warlock's surprise since he expected it to remain by his side.

Arthur Douglas is living a happy life with his wife Yvette in Warp World, and the heroes that banded together to fight Devondra officially joined forces to become the Defenders of their world. In Omnipotence City, Loki sets out to answer to Warlock's actions. Warlock ponders on the final fate of the Infinity Stones, expressing that he feels like a piece of himself is missing.[8] 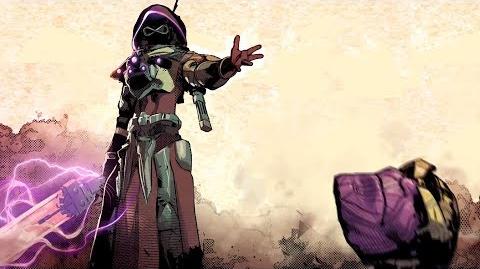