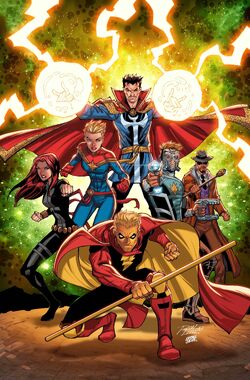 After the Living Tribunal's decree that the Infinity Gauntlet could no longer be used in conjunction, Warlock decided to separate the gems among a set of custodians.[1]

Warlock kept the Soul Gem, gave the Time Gem to Gamora, the Space Gem to Pip the Troll, the Power Gem to Drax and the Mind Gem to Moondragon,[2] He secretly also bestowed the Reality Gem to Thanos.[3] The team was disbanded after the gems ended up in the Ultraverse.[4][5]

Following the destruction and rebirth of the Infinity Stones, these relics of power became scattered across the universe. They eventually fell in the hands of these individuals: Warlock (the Soul Stone), Turk Barrett (the Mind Stone), Black Widow (the Space Stone), Star-Lord (the Power Stone), Captain Marvel (the Reality Stone) and Super-Skrull (the Time Stone). After Doctor Strange stole the Time Stone from the Super-Skrull, he contacted the other wielders of the Infinity Stones and requested parley to reassemble the Infinity Watch for the sake of the gem's protection.[6]

The Infinity Watch convened in Central Park on Earth. Their meeting was interrupted by the arrival of Gamora, who set out to collect the Infinity Stones as part of a plan to reunite with a fragment of herself that was trapped within the Soul Gem.[7] In the middle of the ensuing fight, Doctor Strange convinced Turk Barrett to hand over the Mind Stone and walk away. After taking the Reality Stone from Captain Marvel, Gamora progessively got hold of the rest, murdering Warlock in the process.[8]

Like this? Let us know!
Retrieved from "https://marvel.fandom.com/wiki/Infinity_Watch_(Earth-616)?oldid=6046869"
Community content is available under CC-BY-SA unless otherwise noted.