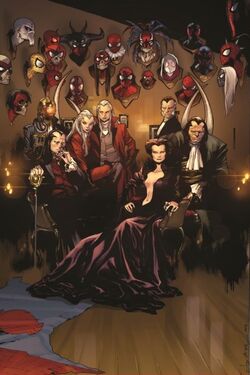 My "mission"? There is no "mission." This is what my kind does. We kill the spiders. It's our way. As for others like me... pray you never meet the rest of my family.

The Inheritors are a clan of totemic hunters who feed on the life force of Totems, beings that connect the animal and Human kingdoms, originally from Earth-001. They have battled and fed on both totem avatars as well as totemic Gods. At one point, they sought to defeat the spider deity the Master Weaver. The clan mother and her offspring Bora, Verna, Brix, Daemos, Morlun, Jennix and Karn attacked him at his home. But when Karn got a chance to strike, the Weaver revealed Karn had no pleasure with death and wished he could create and not destroy. Karn hesitated and his mother attacked the Weaver and was killed. While Karn was in shock, his father, Solus, arrived and subjugated the Master Weaver with his siblings. Karn was confined to wear a mask to hide his shame and became an outcast. Seeing that the Weaver's power could be used, they used chains designed by Jennix to control the Master Weaver's power in order to travel between dimensions and hunt all Spider-Totems in the Multiverse.[4]

When the Inheritors managed to gather three spider-totems needed to perform a ritual, The Other, The Scion, and The Bride, the Spider-Army formed to oppose the Inheritors travelled to their base, Loomworld, to stop them.[5]

In the end, the Spider-Army managed to overpower the Inheritors and stop the ritual which would've ended them all. The Inheritors were left in Earth-3145, a universe with a radioactive Earth, where they would die due to them being extremely vulnerable to radiation, and couldn't escape, because the Master Weaver they had enslaved and used to travel across the Multiverse had been killed. However, Spider-Man gave them the knowledge of a shelter in Sims Tower, where they could survive, but not pose a threat anymore.[3]

The Web-Warriors would eventually send Spider-Bots to monitor them but they were destroyed.[6] Meanwhile, the Superior Spider-Man combined Jennix's and the Jackal's technology to create clone bodies to where he could transfer his mind should his current body die.[7] This would make Jennix use the technology of the Spider-Bots to hack the cloning tubes and create new clone bodies to them and make their triumphant return.[8] After cloning their father's body and retrieving the crystal containg his soul, they managed to return him to life.[9] In the end, Miles, empowered by the Enigma Force, killed Solus with the Sword Vigor and the Spider-People used the Jackal's cloning tubes to create new baby bodies to the rest of the Inheritors, with no memory of their past, when they found out that Solus put the hunger in his children and it could be reversed. They were later adopted by Spider-Ma'am.[10]

Like this? Let us know!
Retrieved from "https://marvel.fandom.com/wiki/Inheritors_(Earth-001)?oldid=6080971"
Community content is available under CC-BY-SA unless otherwise noted.