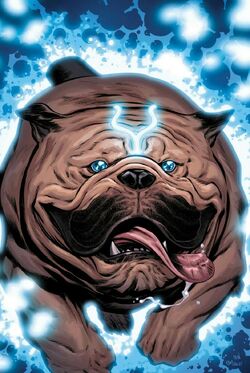 Only a handful known examples of Inhomo canis lupus familiaris exist, all of which currently stem from Lockjaw, his sibling or his children. There mother had been brought to Attilan as a puppy and experimented on by the Surgeon Supreme. She was impregnated by her own cloned genetic material and gestated five puppies with the purpose of performing Terrigenesis in the womb. Lockjaw was successfully mutated, while his siblings were not, however it was later discovered that one his siblings also mutated and gained these abilities.[2]

Teleportation through time and space only currently known powers [2]

Less than a dozen known.[2]

Like this? Let us know!
Retrieved from "https://marvel.fandom.com/wiki/Inhomo_canis_lupus_familiaris?oldid=5616523"
Community content is available under CC-BY-SA unless otherwise noted.