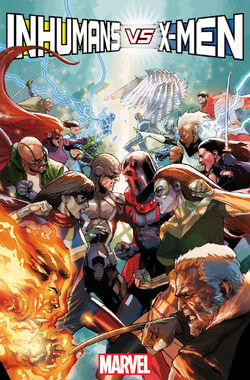 Eight months ago, Beast starts to help Iso (his new lab partner) and the Inhumans with the mutant problem: the Terrigen Cloud encircling the globe. Meanwhile, Emma Frost decides to test her powers by jumping off a cliff and seeing how fast she can morph into her diamond form, much to the Stepford Cuckoos' confusion. Two months later, Beast and Iso meet with the Inhuman delegates and Beast learns the cloud is shrinking as Emma Frost meets with Magneto and his team to talk about the recent state of the Inhumans, and to test her increased speed of morphing into her diamond form by making Magneto attack her. Four months ago, Beast and Iso are in the Savage Land tracking the Terrigen Mist while Emma Frost meets with Young Beast and his X-Men to ask them for their help with her secret plan. Two months later, Beast informs Queen Medusa of his discoveries and she tells Black Bolt, her sister Crystal, and her son Ahura. to be prepared for war. Emma Frost meets with an unidentified woman and the woman agrees with Emma's plan. The day before, Beast discovers something alarming: the Mist is becoming more saturated as Emma Frost arrives in Limbo to meet with Storm to tell her plan to her.[1]

After visiting the grave of Cyclops, Beasts approaches the representatives of all three factions of X-Men, Rogue, Old Man Logan, and Forge to inform them of their situation: the Terrigen Cloud is becoming part of the atmosphere. Emma let's her plan be known and everyone but Beast, Forge, and Rogue agrees to the plan. When Beast tries to stop Emma from starting her plan, Storm knocks him out and Emma's plan starts coming to fruition. First they took care of Black Bolt by using Emma, who lets him know in private that their truce is over, and Dazzler, who knocks Black Bolt out by using his voice against him when he tries to attack her. Then Crystal and Gorgon save a mutant (secretly Magneto) from being hit by the cloud. Magneto later reveals himself and destroys their ship. Jean Grey later visits Karnak at the Second Tower of Wisdom and traps him in a mind loop. After leaving from the care of Ms. Marvel while she is walking him, Lockjaw is knocked out by Fantomex. In Attilan, Medusa is commemorating three young kids for their bravery as they are about to head towards the cloud. Later, she learns about the X-Men's plan and sees them do the unthinkable: a group of X-Men flying towards Attilan. The war begins.[2]

As the siege of Attilan gets underway, Human Torch begs to stay with Medusa, but she sends him to go help the other Inhumans and she gets ready for battle. As she gets ready, Medusa sends Iso and Inferno away from New Attilan to go find other Inhumans to help them. Storm tells the X-Men to leave the citizens alone as their main focus is the Inhuman Royal Family. Magik starts her part of the plan and teleports the Inhumans to their prison in Limbo. Xiaoyi and Dante manage to get away from New Attilan, but end up being chased by Wolverine, from who they manage to escape by using Eldrac the Door to teleport away from there. They stop for a break, but find themselves being confronted by another threat: Old Man Logan.[3]

Iso leaves Inferno to Logan and heads for a machine being operated by Forge that is attempting to destroy the Terrigen Cloud. Iso theorizes the machine was built to compress the cloud and turn it solid so Forge can safely incinerate it, which Forge confirms. Meanwhile, Inferno decides to plunge Logan's claws into his shoulder-blade and use the connection to incinerate Logan as Iso uses her pressure abilities to destroy the Terrigen Compressor. The two take the defeated X-Men's ride as Logan reports back to Storm that the machine was destroyed. In Limbo, Naja and Flint learn where they are from Johnny. The Inhumans count their numbers and notice that neither Black Bolt nor Karnak is among them. Nur recounts that the X-Men have missed one vital factor: the NuHumans that don't live on New Attilan (minus Ahura, who wants to stay out of the war). Back on Earth, Iso and Inferno call up Ms. Marvel and ask her to recruit an Inhuman strike team to find the Inhumans who were taken. Kamala recruits Moon Girl and her trusty partner Devil Dinosaur, agent of S.H.I.E.L.D. Quake, Unity Squad member Synapse, intangible ghost Mosaic, inhuman diplomat Grid, and powerhouse Reader to help them save the Inhumans. In the meantime, Karnak finds a flaw in Jean's telepathic defense and manages to break it. He escapes from Grey, but ends up somewhere else: The World, where he now have to come face to face with Fantomex. Young Beast informs his older self that the cloud is accelerating faster. Rogue remarks that when the Inhumans get out, they are going to be mad, and Emma says they will be madder when they learn what they did to Black Bolt, who is currently being kept unconscious inside a soundproof cage.[4]

On Muir Island, Mosaic and Reader warp in to start the NuHumans' plans. Reader tells Morris he needs to find Magneto and that he has to stay away from the blondes and redheads. Meanwhile back in Limbo, Medusa and the other Inhumans hatch a plan to use Gorgon's bull legs and Flint's geokinesis to create a sonic booster to shatter the barrier that holds them. The plan works and the Inhumans fight off demons as they head to the the Jean Grey school.

Back on Muir Island, Morris manages to get into the X-Men's base and finds Magneto in the middle of an argument between the X-Men's forces. Morris manages to sneak his way into Magneto and find out his plan. Suddenly, Magneto knows that he's being possessed and knocks Mosaic out of his body and into the way of the Stepford Cuckoos, Cyclops and Young Angel. Magneto tells Storm that a NuHuman has possessed him and knows of his plans. Young Iceman shows up and lets Storm know that a Blackbird was stolen. Colossus tells Ororo that the Royals escaped and are on their way. Storm asks Piotr to hold off the Inhumans. Johnny forms a massive flame barrier around the school in order to cut off the X-Men. Naja notices that something is coming: Colossus.

The NuHuman team is holding Forge hostage and they notice the Blackbird arrive. To their surprise, it's Morris as Cyclops who flew the ship and brought it to them. Morris tells them that the Inhumans are trapped in Limbo. Iso starts to formulate a plan to get there, but Morris tells them he learned another thing: the status of the Terrigen Cloud and why the X-Men are fighting the Inhumans. The NuHumans are shocked and apalled at the new information, and Ms. Marvel asks one question: "Who are the good guys?"[5]

Karnak, Fantomex, and Jean Grey battle in The World. Karnak knocks out Jean Grey and knocks Fantomex through a window. Karnak then plans to find a way out of here and manages to find a way out: a knocked out Lockjaw. In X-Haven, Colossus and Gorgon start their battle as Medusa and the others make their escape. The Inhumans find Black Bolt, but he is being guarded by Havok. Havok threatens to kill Blackagar, but Medusa tells him that if he kills Black Bolt, nothing will stop her from killing Havok. Havok leaves Black Bolt to them, but he also lets them know that there is no way out.

Meanwhile, the NuHumans have now teamed up with Forge to destroy the cloud. Forge shows them plans for the Terrigen Eater. Iso apologizes for destroying it, but Moon Girl intervenes. She says that the design is too bulky and won't be able to move. She redesigns it, to Forge and Iso's praise. But she needs a large amount of materials to build the new Terrigen Eater. Iso takes Forge and Lunella to Ennilux to go see Ahura to get enough materials as the others go to the cloud.

Synapse and Reader arrive in the World and rescue Karnak and wake up Lockjaw. In Iceland, Grid and Cyclops talk to each other as the Blackbird lands. Ms. Marvel remarks about the view, but then changed her mind when they were confronted by the X-Men. A massive battle ensues. Cyclops defeats Gorgon and he and Havok head towards the battle.

In the Phillipines, Medusa notices that the Inhumans have done something to Black Bolt's voice, but that doesn't matter because Black Bolt can still fight. In Iceland, Storm asks Scott what he is doing, but Emma says that her Scott and her do this kind of thing all the time attacks Scott. Ms. Marvel attacks Emma Frost and supports her fellow Champion. Mosiac goes after Storm and possesses her. Grid attacks Magneto, but Magneto decides to stop the battle by launching the Blackbird right at the two colliding forces.[6]

The brawl intensifies as Medusa, Black Bolt, Synapse, and the other Inhumans who were captured arrived at the battle. Johnny and Crystal stop the crashing Blackbird, as Emma Frost tells the the Stepford Cuckoos to possess any Inhumans to their side. The Cuckoos and Emma took control of Grid, Inferno, Johnny, and Quake. Naja attacks Storm, who is currently possessed by Mosaic. Black Bolt attacks Emma Frost, and Emma uses her diamond form to stab him in the shoulder, which also frees Johnny from her telepathy. As Emma prepares to kill Black Bolt, Karnak and Lockjaw arrive and take her down.

As Medusa takes down Psylocke, Reader tells her that they are losing. Just as he admits defeat, Ennilux zeppelins arrive with Ahura, Iso, and Moon Girl in tow. Xiaoyi tells Medusa about everything and Lunella gives Medusa a remote. She explains that the remote controls the Terrigen Compressor, and one push of it will wipe out the Terrigen cloud and that the choice to wipe it out should be Medusa's. She presses the button and destroys the Terrigen Cloud.

Emma asks why the battle is stopping, and Storm replies that their goal is achieved. Emma retaliates by saying that they killed Scott and she wants revenge. Just then, the past Cyclops tells everyone that Scott died during their first encounter with the cloud, much to Storm's rage. Emma tries to condone her actions, and unleashes her ultimate weapon: Inhuman-hunting Sentinels. The Inhumans and X-Men team up to take them down, with Forge horrifyingly realizing that he built them under Emma's control. The Sentinels then kill Cerebra, as Emma takes control of Magneto and he unleashes an attack.

Johnny offers to take Medusa to Emma, but Black Bolt goes with her, with every Inhuman calling their reunion beautiful. Medusa takes down Emma and frees Magneto, who is quickly blasted by Havok. As Medusa choked the life out of Emma, Havok also attacked Medusa and took Emma away just as the Sentinels were destroyed.

In the aftermath, Storm, Logan, and Jean all apologize to Beast. Emma Frost adopts a new identity and a new Cyclops based look, and Medusa decides to abdicate her throne and make Iso the new queen of the Inhumans and break up with Johnny and finally decides that she is free an can do anything she wants and she visits Black Bolt at the Quiet Room.[7] 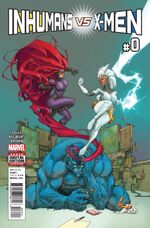 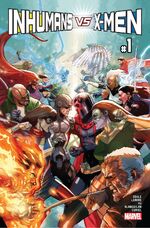 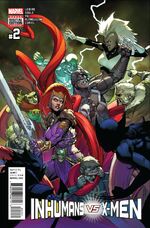 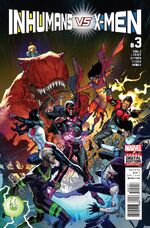 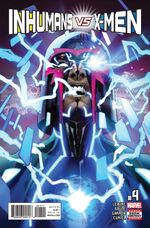 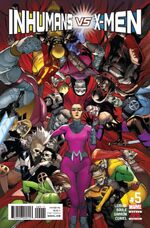 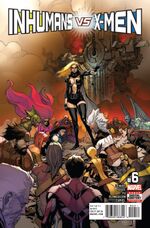 Retrieved from "https://marvel.fandom.com/wiki/Inhumans_vs._X-Men?oldid=5532259"
Community content is available under CC-BY-SA unless otherwise noted.