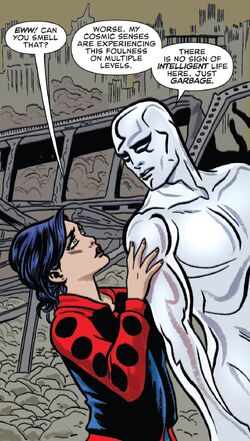 Inkandessa 2 was the second of a four-planet system, and also the second home of the race predecessor to the Light-Forms after they had destroyed the ecosystem of their first planet, Inkadessa 1. Unfortunately, Inkandessa 2 suffered of a similar fate, and the planet became a wasteland stuffed with garbage.

It was briefly visited by the Silver Sufer and his companion Dawn Greenwood, who had been driven off Inkandessa 1 by its desolate state. Having observed a similar panorama in Inkandessa 2, they quickly moved on to Inkandessa 3, and then later on to Inkandessa 4.[1]

Like this? Let us know!
Retrieved from "https://marvel.fandom.com/wiki/Inkandessa_2?oldid=3981067"
Community content is available under CC-BY-SA unless otherwise noted.