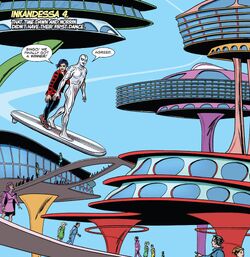 Inkandessa 4 was the fourth of a four-planet system. It became the homeworld of a new artificial species known as the Light-Forms, beings made of solid light that originated from a race of organic beings which had previously unwittingly destroyed the ecosystem of their first three planets, Inkandessa 1, 2 and 3. The Light-Forms were created by Count Crankshaft with the purpose to almost entirely eliminate the impact on the ecosystem of his people.

The 1% of the population that didn't undergo the transition into Light-Forms became known as the Meat-Forms, living, dying and growing older in a secluded community led by Countless Crankshaft where they maintained and kept running the Great Machine, the device that made the Light-Forms possible.

Centuries after the Light-Forms were created, Inkandessa 4 was visited by the Silver Surfer and his companion Dawn Greenwood during their journey of exploration across the universe. Not soon after arriving, Dawn asked the locals for a restroom. Shocked by the presence of a "flesh-bag" that excreted waste, the Light-Forms directed her to the scanning facilities, and, without her consent, copied her essence into a Light-Form with her appearance and all of her memories. They then returned her to Silver Surfer, with neither of them knowing the truth.

The two visitors were then shown around, enjoying the culture of Inkandessa 4. When the hologram of an animal at a zoo the Surfer and Dawn were visiting glitched out and phased through its cage, the Light-Forms revealed Silver Surfer and Dawn not only the fact that their entire planet was made of solid-light people and structures, but also that Dawn had been replaced with one herself, arguing that for them it was morally wrong to have her physical form contaminating the planet.

When the Light-Forms refused the reveal the Surfer the location of Countess Crankshaft's farm, where Dawn's original body had been shipped to be destroyed, he saw himself forced to use his Power Cosmic to temporarily disrupt all of the solid light constructs and bypass the farm's holographic shield, causing the Great Machine to malfunction.

The Light-Form Dawn used the Surfer's surfboard to make haste to reach the farm, and managed to save the original Dawn. The Surfer subsequently used his powers to bring her back to life. Countess Crankshaft scolded the Surfer and Dawn for messing up the Great Machine, putting at risk the existence of the Light-Forms, and both apologized. They then decided to depart, leaving the Light-Form Dawn behind, as she was required to remain on the planet and relatively close to the Great Machine for her to exist. Following an emotional farewell between the Surfer, Dawn, and her Light-Form duplicate, the two visitors left.[1]

Following the death of the original Dawn Greenwood, the Silver Surfer returned to Inkandessa 4 to reunite the Holo Dawn with Light-Form duplicates of the rest of her family and even himself.[2]

Like this? Let us know!
Retrieved from "https://marvel.fandom.com/wiki/Inkandessa_4?oldid=6379345"
Community content is available under CC-BY-SA unless otherwise noted.