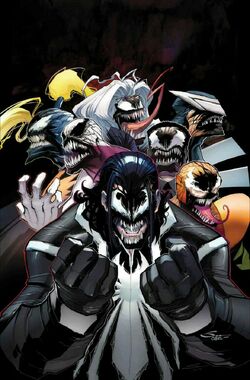 After getting hold of the Mania symbiote, Lee Price set out to build a criminal empire under the alias of Maniac. He began to take control of numerous small-time crooks, coating their faces with fragments of his symbiote which bound them to his will.[1] As part of a major power play, Maniac took control of the top enforcers from Black Cat's Gang, including the Black Cat herself.[2]

While tracking down the Mania symbiote, Spider-Man and Anti-Venom stumbled upon the Inklings. Using the remnants of her free will, Black Cat kissed Anti-Venom, destroying the piece of Maniac's symbiote that was controlling her. After the Black Cat fled, Spider-Man and Anti-Venom were captured by the Inklings.[3] Spider-Man was successfully taken over and began a crime spree, hijacking delivery trucks carrying luxury goods in an effort to flush out Black Cat. Andi Benton, determined to retrieve her symbiote, saved Anti-Venom from being executed; and Venom and Black Cat freed Spider-Man from Maniac's control. However, Maniac was successful in infiltrating a gathering of the world's five largest organized crime syndicates and infected them with his symbiote, taking them over.[4]

The heroes assaulted the cabin where the gathering was taking place, and used weaponry coated in Anti-Venom to free the many of the Inklings from Maniac's control. The Inklings were finally defeated after Andi detonated the Anti-Venom bullets that Venom was holding, showering Maniac's henchmen with the formula to free them from his control. Maniac subsequently had the surviving pieces of the Mania symbiote return to him and reabsorbed them.[5]

Retrieved from "https://marvel.fandom.com/wiki/Inklings_(Earth-616)?oldid=5548108"
Community content is available under CC-BY-SA unless otherwise noted.