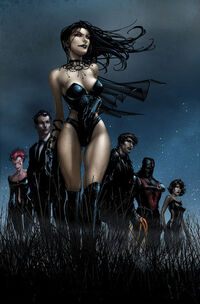 Base of Operations
Mobile; including Necrosha, New Orleans, etc
Affiliations

Selene's Inner Circle were chosen specifically for their mutant abilities designed for killing. On behalf of Selene, the clan of deadly mutants were to aid her in her rise to goddesshood, a state she believes she was destined for.[1]

To accomplish her goal, Selene employed her former lover Eliphas (now known as Eli Bard), who had been her loyal companion in Ancient Rome. Bard had acquired the ability to infect others with the techno-organic virus. The virus had been used by his previous employer, Bastion, to resurrect and control notable anti-mutant humans hell bent on eliminating mutantkind. For Selene's purposes Bard would use this ability to resurrect an army of mutants to do her bidding (Selene's own mystical abilities came into play, but the effects of her powers are unknown).[citation needed]

Bard first resurrected the mutant Caliban, whose ability to sense and track mutants would prove useful in locating the bodies of deceased mutants. The trio then began to resurrect key mutants whose resurrection and attack would provide emotional turmoil to the X-Men. Before long, the group began resurrecting the millions of mutants who died on the nation of Genosha.[citation needed]

The collective group's first mission together was to seek revenge on Selene's behalf by massacring a building of one of the Hellfire Club's branches.[citation needed]

Blink then teleported the legion of mind-controlled, resurrected mutants to the mutant haven of Utopia where the X-Men dwelled.[citation needed]

Eli Bard revealed to Blink his failure to retrieve an ancient relic dagger after stabbing the Demon Bear with it when he had resurrected both Caliban and John Proudstar into a Cheyenne graveyard. Upon realizing it was vital to Selene's ascension into a goddess, Bard asked Blink to help him retrieve. She agreed, but instead of helping him, Blink teleported the pair to Selene and spilled Bard's betrayal to her leader. Selene was disappointed with Bard and instructed the Inner Circle to teleport to Utopia themselves to retrieve it. The group ambushed the X-Men as they were already near defeat against Risque, Firefist, Darkstar and Bolt.[citation needed]

Retrieved from "https://marvel.fandom.com/wiki/Inner_Circle_(Selene)_(Earth-616)?oldid=5548112"
Community content is available under CC-BY-SA unless otherwise noted.