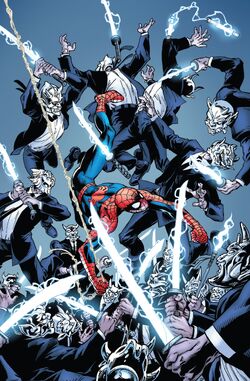 The Inner Demons were a Tong whose core business was the drug trade (e.g. heroin and the synthetic drug Shade), including the smuggling of drugs, manufacture of synthetic drugs, and street-level retail sales. They were also involved in other criminal activities, including; the protection rackets, illegal gambling and prostitution.[2][3][4]

It was established out of Asian immigrants who were once slave laborers for the Green Goblin. After being freed, they were trained by Mister Negative in the martial arts for legitimate work as security guards. In reality he corrupted them into becoming his enforcers and drug dealers. Spider-Man first confronted them while Mr. Negative was extracting Bruno Karnelli's blood.[5] They have successfully gone to war with the Maggia twice, emerging victorious both times.[5][6] In the first war, they wiped out nearly all of the Maggia leadership in NY City by use of the Dragon-Breath poison. The Inner Demons were later defeated by Spidey in Battery Park.[5]

A while later, the Inner Demons were attacked by the Anti-Venom.[7] During the Dark Reign, the Inner Demons found themselves on the defensive as Chinatown was placed under siege by Osborn's H.A.M.M.E.R. and their territory was under assault by Hood's Gang. Which ended when Osborn called it all off due to the blackmail material that Mr. Negative possessed.[8] The Inner Demons continued making inroads into Maggia territories and markets, due to the Maggia being under the leadership of the inept Bruno Karnelli. In the next war between the Inner Demons and the Maggia, that was orchestrated by Mysterio, they emerged victorious by default as the Maggia forces were killed by Mysterio's bomb while the Inner Demons survived.[6]

Recently when Mister Negative had been arrested and deported to China, the Inner Demons freed him in route and relocated to Shanghai in China. Where they established themselves and have become a major player in the underworld, perhaps the dominant player, using the drug trade to establish their power.[4]

The Inner Demons are gifted with a regenerative factor, which has allowed them to regenerate lost limbs and survive being stabbed or shot multiple times. Recovering within seconds or minutes of some lethal wounds.[9][10][6]

Like this? Let us know!
Retrieved from "https://marvel.fandom.com/wiki/Inner_Demons_(Earth-616)?oldid=6400698"
Community content is available under CC-BY-SA unless otherwise noted.