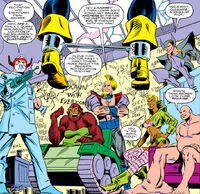 The Institute of Evil were a super-villain team of Earth-712 whose principal enemies were that world's premier super-hero team the Squadron Supreme. They had apparently battled the Squadron on many occasions, but at one time made the mistake of kidnapping the Squadron members' various loved ones. They were defeated by the Squadron, who at that time possessed the Behaviour Modification Device, which was capable of altering criminals' minds and forcing them to reform. As the Squadron had recently lost several members, they voted by a majority to behavior-modify the Institute members (bar Mink, who was not with the team at that time and remained at large) and recruit them to the Squadron. They served with the Squadron for a time with no problems. However, soon Doctor Decibel was killed when he drowned in Quagmire's otherdimensional tar-like substance, and Quagmire was apparently killed in the same incident (though had actually been transported to another dimension). Ape X, meanwhile, was rendered catatonic when she was confronted with a moral dilemma that clashed with her behavior-modification.[1]

However, the former Squadron member Nighthawk, who had left the team in protest at the idea of behavior-modification of criminals, began recruiting members for a team to oppose the Squadron, the Redeemers. He and his comrades began abducting the remaining former Institute members and reversing their behavior-modification so he could recruit them to his team. When the Redeemers confronted the Squadron, the former Institute members showed their true colors and fought the heroes. Two of them, however, were killed in the resulting battle - Lamprey was killed when he tried to absorb all the energy in Doctor Spectrum's Power Prism, and Foxfire because she remained loyal to the Squadron and killed Nighthawk, only to be killed by the Mink in return. Shape remained loyal to the Squadron too, and remains with them to this day. Of the other former Institute members, the Mink survives and possibly went back to her criminal ways, Quagmire crossed over to Earth-616, and Ape X is possibly still in her catatonic state.[2]

Retrieved from "https://marvel.fandom.com/wiki/Institute_of_Evil_(Earth-712)?oldid=5548126"
Community content is available under CC-BY-SA unless otherwise noted.