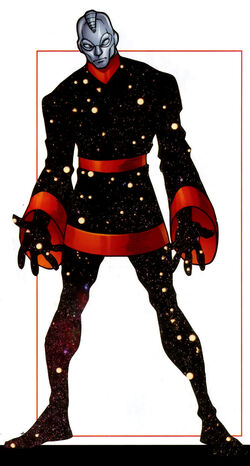 I.S.A.A.C. is a super-intelligent computer that fills the interior of the moon of Titan and serves the Eternals and controls the moon's artificial environments and other functions. He was created by Mentor, and can create robotic forms to perform physical acts for him.[1]

At one time, I.S.A.A.C. was reprogrammed by Thanos, to exterminate life,[2] this included the creation of new artificial Eternals, who would execute his plans.[3] Captain Marvel and Drax the Destroyer, brought the computer back under the control of the other Eternals.[4]

Starfox once connected I.S.A.A.C. to Earth so his computing ability could help the Vision recover from a coma.[5] This effort was successful,[6] but ended up causing long-term instability in the Vision, culminating in an attempt to take over the world through Earth's computer network, much like I.S.A.A.C. controlled Titan.[7]

ISAAC and Mentor once determined that Moonstone of the Thunderbolts was empowered by a fragment of the Lifestone Tree. ISAAC initially ruled that Karla Sofen wasn't fit to possess the fragment, but Captain Marvel and the Thunderbolts talked him into leaving the fragment in her custody.[8]

When an early version of Ultron that was sent into space by the Avengers years ago crashed in Titan in the present, it took over I.S.A.A.C. and started infecting all of the Eternals, slowly turning Titan into "Planet Ultron."

After Ultron, who had been merged with his creator Hank Pym, realized what he had done, he left Titan, which seemingly returned to normal.[9][10]

Like this? Let us know!
Retrieved from "https://marvel.fandom.com/wiki/Integral_Synaptic_Anti-Anionic_Computer_(Earth-616)?oldid=5465020"
Community content is available under CC-BY-SA unless otherwise noted.