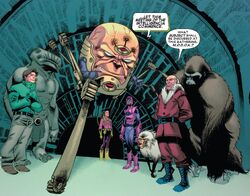 A group comprised of some of the greatest and most sinister minds of the Earth, the Intel was initially a group formed to exchange information between criminal geniuses. Their principal work together was the stealing of the different parts of the Library of Alexandria, scattered in Wakanda, Atlantis, and Olympia. Their activities caused the coming of the Beyonder, by using a tachyon ray, and they also healed the Venom Symbiote in the aftermath of the Secret Wars. Eventually, the Intel was betrayed by Doctor Doom and disbanded. But later, when the Hulk returned to Earth and decided to wage war on the planet, MODOK and the Leader reformulated the team, hacking into defense satellites and channeling cosmic energy through them which ultimately led to the Hulk's defeat. Through this information they gathered, the Intelligencia discovered how to combine gamma and cosmic radiation to create a powerful being.[1]

They approached General Ross and convinced him to become their ultimate weapon, the Red Hulk, as part of an scheme to defeat the Hulk and conquer the world.[2] Many of the Hulk's allies were captured, brainwashed and transformed into Cosmic-Gamma Mutates, like Red She-Hulk[3], A-Bomb[4] and Amadeus Cho.[5] The plan ultimately failed, Amadeus used his recently gained powers to change MODOK back into George Tarleton again[3] and the Red Hulk drained the Leader's body of all radiation and he was no longer the Leader.[2]

A more recent line-up, composed of M.O.D.O.K. Superior, the Wizard, the Mad Thinker and his Awesome Android, the Red Ghost and his Super-Apes, and the Chameleon disguised as Klaw, developed a new weapon with the ability of sending specific objects to space, called the Zero Cannon. With it, the Sinister Six kill the Winter Guard, though M.O.D.O.K., some A.I.M. agents, and one Super-Ape survived.[6]

M.O.D.O.K. then managed to revive the dead members of the Intelligencia, as well as make space for the Trapster to join them, and formulate a plan after their predicted shattering of the superhero community. Their meeting was interrupted by Deadpool, who tried to sink the ship they were on, but he was defeated by Trapster.[7]

The Intelligencia appeared to disband after some of its members, including the Wizard and the Mad Thinker, were apprehended by Victor von Doom, who had turned a new leaf and took up the mantle of Iron Man.[8] Some time later, in its place a New Intelligencia arose.[9]

Like this? Let us know!
Retrieved from "https://marvel.fandom.com/wiki/Intelligencia_(Earth-616)?oldid=6476323"
Community content is available under CC-BY-SA unless otherwise noted.