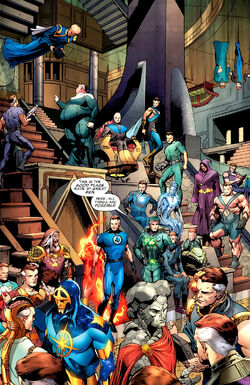 We called it the Council. I called them......my brothers. And what was the great work we would do? Together, we would solve everything.

Around half a century ago, a freak accident pulled every version of one man from his universe and forced them into a bizarre prize fight from which only one of them could survive. In most cases, this would not have had lasting consequences... except that man was Nathaniel Richards.[2]

Deprived of a father, the sons of the infinite Nathaniels became isolated individuals.[3] They used their amazing intelligence to make the world a better place, but with far less care to become a part of the world as a social participant.[4] And as the sons grew up, one by one they built bridges into the nothingness between universes and slipped away.[5]

The Council was founded officially by three versions of Reed Richards who had each acquired their universes' Infinity Gauntlet.[6] Deciding that it was what reality needed, they built a hall in the space between universes, from which they could access all universes, and they began working with their counterparts to make the multiverse a better place - averting scientific disasters, terraforming whole empty planets to feed universes plagued with famine, and stopping harsh parallel versions of menaces such as Galactus and Doctor Doom.[5] However, the cost of the work was that each Reed had to give up his world for the sake of the multiverse. Each man left his world behind, becoming a multiversal science-soldier and being forgotten in turn by those he had called friend.[4]

The Council met its end around the time it was reached by the one Reed who grew up with a Nathaniel - Reed Richards of Earth-616. Due to the influence of his father, Richards could not make the trade-off that the other Reeds had, and left them. This corresponded with the beginning of an epic battle between the Council and the Celestials of Earth-4280, who desired the use of their transuniversal machines to conquer all of reality. Most Reeds died as a result, leaving only a small handful of remaining members of the Council alive.[4]

Reed Richards had deactivated the Bridge after his interaction with the Council, but his genius daughter Valeria snuck into his lab and reactivated it from simple curiosity. When she did, four of the surviving Reeds escaped from interdimensional limbo into Earth-616 after the rest had been killed, and decided to instigate a prophecy known as the War of the Four Cities, in the hopes of garnering the strange energy needed to get them home by destroying Earth-616. One Reed was sent to the Moon to make a deal with the Universal Inhumans to obtain permission to the dormant dynamo needed to build the Sol's Anvil device, but was killed after the Inhumans discovered he was trying to trick them.[7] Two Reeds attempted to take the Evolutionary Engine from the Moloids, but their plans were halted by the Inhumans who defeated the Moloids and captured two of the Reeds, leaving one to escape with a detained Dr. Doom.[8] In an effort to rebuild the Kree Empire in the name of restoring Kree authority from the Inhumans, Ronan the Accuser and Crystal absconded with the two captured Reeds and used them as components to re-create Supreme Intelligence, killing the two Reeds.[9] The Alpha Reed ran to Latveria to build The Bridge again and return home after his plan to destroy the planet had failed. After entering the Bridge (to the place where the Council of the Reed Richards was), he was attacked by Celestials and was killed by using the Ultimate Nullifier, officially ending the council of Reeds.[10]

The council's space was later inhabited by the Earth-616 Doom and his surviving lobotomized counterparts.[11] After the abdication of Doom, the Future Valeria Richards decided to take up residence there to take advantage of the unique opportunities it represented.[12]

Some time following the destruction and rebirth of the Multiverse as a result of the incursions and the ascencion of Earth-616's Reed to godhood, respectively, the Interdimensional Council of Reeds was rebuilt. This new council saw in a negative light the practice of their former iteration that each Reed severed ties with their friends and family, arguing that these bonds actually gave them strength and kept them grounded. This fledgling cabal made use of special badges which allowed its members to leave a duplicate of themselves behind any time they left their universe to come together, so they would no longer have to leave their loved ones behind.

The reformed Victor von Doom of Earth-616 stumbled into the reformed Council during a multiversal journey with The Thing, the Human Torch and Dr. Rachna Koul. After encouraging Victor to continue traveling down a heroic path, the Council returned him to the universe from which he had traveled to their meeting place. Outraged by the revelation that the Council of Reeds existed again, Victor warned them that it would meet the same fate as its previous incarnation.[13]

Members of this new Council of Reeds began working with the Reed Richards of Earth-1610, as part of Project Oversight, with the intention for him to return to and restore his universe, something his research showed symbiotes would allow him to do. Early in this project, Reed-1610 managed to retrieve his earth's Venom symbiote, and pioneered S.C.I.T.H.E. technology to collect symbiote codices in order to restore it.[14] Project Oversight was delayed significantly, however, when Carnage began his own quest to retrieve codices in order to revive Knull, and Venom merged Richards' collected codices into his own symbiote.[15]

Council Badges: Members of the new Interdimensional Council make use of special badges to transport to their place of assembly. This badge duplicate the people who use them, so they don't have to abandon their families. When a Reed returns to their native universe, his experiences and memories merge with the ones he left behind. If a duplicate Reed is killed while the original is away, they can't teleport back to their native universe. Otherwise, they would return to their corpse and die as well.[13]

Like this? Let us know!
Retrieved from "https://marvel.fandom.com/wiki/Interdimensional_Council_of_Reeds_(Multiverse)?oldid=7036977"
Community content is available under CC-BY-SA unless otherwise noted.