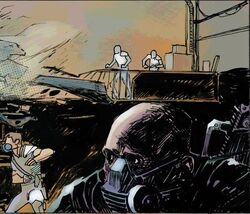 If I.D.I.C. has gone to a clandestine cell system, we're in more trouble than we thought.

Their first known activities included the attempted hostile takeover of an oil refinery owned by Dame Renée de Peyraud. I.D.I.C. resorted to extreme measures when she instead chose to close the refinery, placing a sleeper agent known as Diadem with Peyraud’s company under the guise of a system analyser. After numerous attempts on Dame Peyraud's life, including inducing a heart attack with the help of her personal physician, Dr. Lugash, Diadem persuaded Lord Burtonwil to reopen the refinery, and after a battle with Dame Peyraud's personal bodyguard, Shang-Chi, whom Diadem defeated by inducing temporary paralysis, I.D.I.C. succeeded in wresting control of the refinery from Dame Peyraud.[1]

Sometime later S.H.I.E.L.D. placed Ken Tanaka within the New York headquarters of I.D.I.C. as part of an operation to insert agents into every major corporation; however, Ken decided to defect to I.D.I.C. when it was revealed that the Deltites had corrupted his former employer.

I.D.I.C. contacted Vaughn Security Systems and their agent, Shintaro Kuramoto, met with Wendell Vaughn to discuss upgrading the corporate security for their worldwide data processing network dealing in microtechnologies. Wendell was surprised to find Ken, whom had been at the S.H.I.E.L.D. academy alongside Vaughn, worked for I.D.I.C. and was offered a tour of their facility; however, Quasar was called away to deal with the Absorbing Man.[4]

Vaughn returned to I.D.I.C. to make a presentation to their Board of Directors, but was once again forced to leave, this time feigning illness in order to engage Terminus.[5] I.D.I.C. ultimately granted V.S.S. a contract to upgrade their systems after allowing Wendell one more chance to secure their business. Tanaka, realizing there was little chance of advancement for him at I.D.I.C., left the company to work for Vaughn instead.[6]

After kidnapping the Nuhuman Adam Roderick, I.D.I.C., who had become increasingly radicalized, claimed responsibility with a video delivered directly to S.H.I.E.L.D. via a proxy server.

Due to complications regarding the legal status of Inhumans, S.H.I.E.L.D. hired Magister Karnak to recover the boy, and he promptly and violently interrogated a mole within S.H.I.E.L.D.'s own ranks to learn I.D.I.C. were holed up in a safehouse in Berlin, Germany.[3]

After having skillfully if not brutally dispatched all of I.D.I.C's operatives stationed at their Berlin safehouse, one in particular dubbed the Zen Gunner revealed the location of their messianic figure to the assailant before being eliminated by the enigmatic Inhuman.

Now armed with the new information regarding how the Zen Gunner got his abilities from Adam, whom allegedly, willingly went with the A.I.M splinter cell turned cult fanatics, as well as the name of their new headquarters, Karnak left the safehouse all but unscathed, singlehandedly toppling the entire building complex with one final blow soon after.[8]

Picked up by Field Director Coulson and Agent Simmons, the wayward magister gave them the tip he had ascertained to their quarry's location soon bringing the S.H.I.E.L.D. Helicarrier to a remote structure in Transia, Eastern Europe.

As they neared the inhabited edifice, their vessel was soon bombarded by an enclave of similarly empowered religious agents with sonokinetic abilities, all of which were veritably and viscerally dispatched by the Shatterer who found a weakness within their sound wave blast; producing the corresponding counter-frequency through the vessel's public address system.[9]

Retrieved from "https://marvel.fandom.com/wiki/International_Data_Integration_and_Control_(Earth-616)?oldid=5548142"
Community content is available under CC-BY-SA unless otherwise noted.