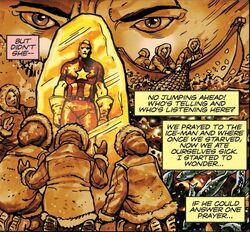 The Inuit are a group of culturally similar indigenous peoples inhabiting the Arctic Circle regions of Greenland, Canada and Alaska. The term "Eskimo" was once used to describe these tribes.

In 1946, Black Patch laid a trap for the All-Winners Squad by robbing Inuit villages.[1]

After World War II, an Inuk tribe found the frozen Captain America and mistook him for a god.[2]

After escaping the Avengers, the Sub-Mariner encountered in the North Sea the tribe, worshiping the ice-trapped Captain America. Angrily, he cast the frozen Captain America into the ocean.[3]

The Inuit worshiped the Inua an extra-dimensional race. The lived in a realm known as Quidlivun.[4]

Chris was an Inuk who lived in Faibanks, Alaska, with his daughter Tiffany and his great-grandfather Auckaneck who in the past worshipped the frozen Cap believing him to be a god and that Chris did not want him to tell that story to his daughter.[2]

Retrieved from "https://marvel.fandom.com/wiki/Inuit?oldid=5548148"
Community content is available under CC-BY-SA unless otherwise noted.