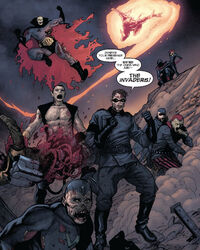 Presumably, prior to their infection with the zombie Virus, the history of the Invaders of Earth-12591 is much the same as that of their Earth-616 counterparts. After being infected, however, they became the vanguard of the Nazis forces and fought the Ducky Dozen soon after their arrival on the Invaders world.[1]

Most of the zombiefied members of the team were killed in this battle, except for Bucky, who alerted this world's Dum Dum Dugan to the Dozen's arrival.[2][3]

Retrieved from "https://marvel.fandom.com/wiki/Invaders_(Earth-12591)?oldid=5548150"
Community content is available under CC-BY-SA unless otherwise noted.