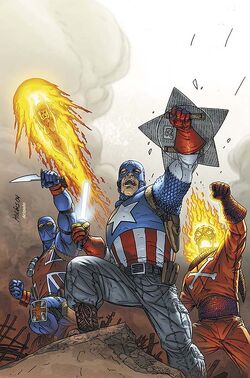 The Modern Invaders team consisted of USAgent (John Walker, the fifth Captain America); ageless android the Human Torch; former Liberty Legion member the Thin Man (Dr. Bruce Dickson), who remained ageless as, evidently, a by-product of his transformation in the super-scientific haven Kalahia; and the Blazing Skull (Mark Todd), who remained ageless due to supernatural means. The Invaders were also assisted by former Golden Age hero The Fin and his Atlantean wife Nia, although they did not officially join the team.

They were formed by the putative U.S. Secretary of Defense Dell Rusk—in actuality the Red Skull—who coerced the Thin Man into gathering this new team, which the Skull intended to use for his own goals. The new Invaders eventually learned of the plan, however and thwarted it, but at the cost of the apparent "death" of the android Human Torch. The majority of the members quit the team after this.

Like this? Let us know!
Retrieved from "https://marvel.fandom.com/wiki/Invaders_(Modern)_(Earth-616)?oldid=5833888"
Community content is available under CC-BY-SA unless otherwise noted.