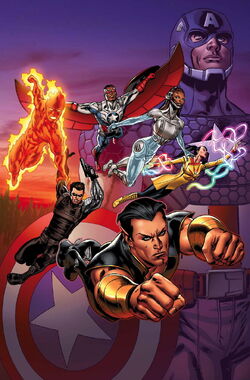 Originally, Captain America, his sidekick Bucky, the original android Human Torch, the Torch's sidekick Toro, and Namor the Sub-Mariner were together as heroes opposing the forces of Nazism. When these superheroes saved the life of Britain's Prime Minister Winston Churchill from Master Man, the thankful Churchill suggested that they should become a team, known as the Invaders.[1]

The Invaders fought the Axis Powers, saving Churchill once again from an attack by U-Man[2] and were brain-washed by the Red Skull into attacking the allies.[3][4] Eventually they found themselves in England, where they met Lord James Montgomery Falsworth, the original WWI-era Union Jack.[5] He joined the team and provided them with a base of operations in England.[6] However, his legs were crushed during their first mission to stop Baron Blood.[7] Eventually Falsworth's children Brian (the second Union Jack) and Jacqueline (Spitfire) became members. The team later added Miss America and super-speedster the Whizzer, during a battle with the Super-Axis. Later, against the threat of the Battle-Axis, the team added the Blazing Skull and the Silver Scorpion to its roster.

During a mission in which they allied themselves with Major Liberty as Captain America was busy with another assignment and Toro had appendicitis, the Invaders (Bucky, Human Torch and Namor) discovered Baron Strucker had acquired a powerful artifact named the Gods' Whisperer which let him control Asgardian gods, and used it to make Hela fight the Allies.[8] Strucker was defeated, and Hela returned to her realm, and the Invaders were left with the Whisperer. They decided the artifact was too powerful to be in control of anyone, and decided to break it into three pieces each of them would hide from anyone. With the help of The Vision, they forgot said events.[9]

In December of 1943, the Invaders were sent to Monte Cassino in Italy in order to retrieve a highly coveted weapon known as the Ordnung Zeitgeist before Hitler's forces could lay claim to it. They encountered a strange green mist that propelled them sixty years into the future where they encountered their modern day successors, the Avengers. Note: The events surrounding this incident have not yet been fully revealed.[10]

The Invaders killed an entire village of civilians in the Netherlands, where they burned and killed a civilian populace, having no other choice, since the civilians became deformed, mindless monsters that turned anything they bit into one of them.[11]

The team continued to fight against several threats, and faced an emotional trauma with the apparent deaths of Captain America and Bucky in a drone aircraft's explosion near the end of World War II.[12] After the war's end, several members—including the second Bucky and Captain America (respectively, Fred Davis and William Nasland, formerly the superhero Spirit of '76)—created a new team, the All-Winners Squad.[13]

Years later, after Namor was kidnapped by the Kree to obtain the location of his piece of the Gods' Whisperer, Jimmy Hammond and the Winter Soldier were attacked by Kree soldiers, who used a special device in each of them to obtain the information of the location of each one of their pieces. With the help of Captain America, the Winter Soldier managed to save the Human Torch from his attackers, and decided to reform the Invaders in order to rescue Namor from Hala, the Kree homeworld, and prevent the aliens from using the Whisperer.[14]

As soon as they got to Hala with the help of the original Vision, the Invaders were ambushed by the Pursuer Corps[15] and later forced to fight the Whisperer-controlled Ikaris. By faking his death, the Winter Soldier managed to get to and free the captured Vision[16] and distract Tanalth long enough for Captain America and the Human Torch to subdue the Kree soldiers present in the battle while Namor fought Ikaris. The Vision teleported to get help from the Eternals and recover the Whisperer. After that, the Invaders returned to Earth and later disbanded.[17]

The Winter Soldier, Namor and the Human Torch reformed the Invaders in order to rescue their former teammate, Toro.[18] Iron Cross, Radiance,[19] Captain America (Sam Wilson), and Toro would later join the team.[20]

Retrieved from "https://marvel.fandom.com/wiki/Invaders_(WWII)_(Earth-616)?oldid=5400585"
Community content is available under CC-BY-SA unless otherwise noted.