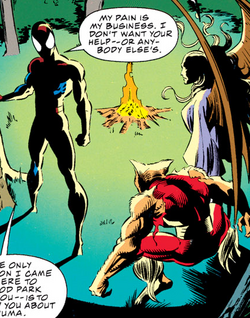 The Steel Serpent challenged one night Iron Fist in Inwood Park. Spider-Man, having tracked Iron Fist to the park with a Spider-Tracer, tried to help, but was easily beat aside by Steel Serpent. The Steel Serpent gained the upper hand and absorbed the very last of Iron Fist's Chi just as Misty Knight arrived. She forced Steel Serpent to let Danny go at gunpoint. However, Steel Serpent, having succeeded in his task, found his opponent not even worth slaying now that he had the power of the iron fist, and so he left the dying Iron Fist with Spider-Man and Misty.[1]
After being found and attacked by Spider-Man and the Daughters of the Dragon, the Steel Serpent headed again for the park, where Iron Fist showed up, seemingly revived, and took on Steel Serpent in combat. During the fight, the double iron fist power of Steel Serpent began to consume his body. Danny, realizing that the power may be lost forever if Davos was to perish, grabbed hold of his opponent. There came a blazing light, then Iron Fist was the only one remaining standing, his iron fist powers restored. Iron Fist explained to his friends that because Davos attacked him with the iron fist but without any limit, the power itself consumed him.[2].

Some time later, Spider-Man was invited to Inwood Park by Nocturne, who was sensing his emotional pain. Seeing Spider-Man, Puma became enraged and suddenly attacked him.[3]
Feeling guilty for hitting Nocturne, who put herself between the two contenders, Puma eventually retreated.[4]

Years later, the Moon Knight noticed the rise of Shadowland from Inwood Park.[5]

Like this? Let us know!
Retrieved from "https://marvel.fandom.com/wiki/Inwood_Hill_Park?oldid=5785933"
Community content is available under CC-BY-SA unless otherwise noted.