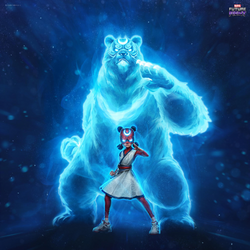 Io is a "half-moon" bear spirit sealed inside of the enchanted mask that is currently in possession of Dan Bi.

When Io was first summoned by Dan Bi, he was impressed with Dan Bi's bravery. They formed a bond, vowing to protect each other from those that may wish to harm them. Together, they set off on a quest to find Dan Bi's father - a quest that will lead them into dark and dangerous shadows of Morgan Le Fay's reach.

Once summoned, Io would copy the movements of mask wearer.

Apart from it, Io also has several powers:

Like this? Let us know!
Retrieved from "https://marvel.fandom.com/wiki/Io_(Earth-TRN012)?oldid=6467486"
Community content is available under CC-BY-SA unless otherwise noted.