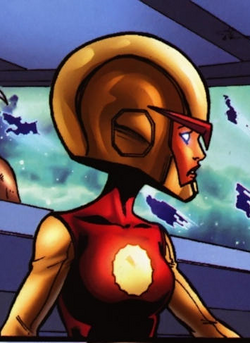 After the destruction of the Nova Corps by the Annihilation Wave, the Xandarian Worldmind secretly sought out new recruits during Richard Rider's sleep hours. Irani Rael, a Rigellian, was among those first selected to be a new Nova Centurion. Soon after her selection, the Worldmind transmitted an emergency signal as the result of nearly being destroyed by Galactus. Irani joined with the four other Centurions to have been selected thus far Qubit, Malik Tarcel, Morrow and Fraktur -- and tracked down the Worldmind's signal.

Earth proved to be the destination. Irani arrived with her fellow Centurions at the tail end of the Skrulls' attempted invasion. They fell right in line behind Richard Rider, the Nova Prime, in helping keep the peace after the invasion's aftermath. These efforts included dealing with a hostage situation perpetrated by the Serpent Society, during which Irani quickly neutralized Sidewinder with a single blast. She later followed the lead of Robbie Rider in apprehending Dragon Man, deferring to his intellect on how to capture the creature.

When the Worldmind merged with Ego the Nova Centurions he recruited were never given the proper training. Due to a lack of experience leading to the deaths of several newly recruited Corpsmen Richard Rider decided that the new Nova Corps had to be built from the ground up. Recent recruits agreed to be given lower ranks and downgraded power wise until they went through training to earn their way back to being Centurions. Irani was downgraded to a Millennian rank which is two ranks below Centurion.[1]

Like this? Let us know!
Retrieved from "https://marvel.fandom.com/wiki/Irani_Rael_(Earth-616)?oldid=6438819"
Community content is available under CC-BY-SA unless otherwise noted.