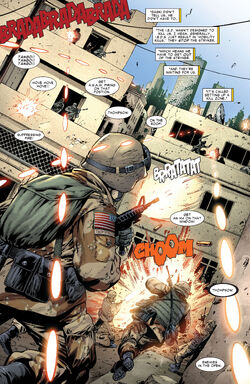 Following the terrorist attacks on New York City on September 11, 2001[1], United States President George W. Bush declared a "War on Terror" which also saw the United States Army invade Iraq and oust their leader Saddam Hussein, beginning the Iraq War. At the same time they also invaded Afghanistan, beginning the War in Afghanistan. This led to American forces installing a new government and attempting to stabilize the region, while clashing with the forces of the terrorist organizations Al-Qaeda.

Leyla a Kurdish woman, who who talent for chemistry to work for the oppressive Iraqi regime. Despairing after her family and husband were killed anyway, she attempted to end her life by submerging herself in a river polluted with highly corrosive chemicals. The presence of an unknown organism allowed her to survive. In her new form, Leyla likened herself to the goddess Ishtar, using her talents for revenge; to this end, she gathered a band of followers around her and started a terror campaign. A group of insurgents used "Vitriol" as it was called - actually a weaponized bacterial strain which reproduced at an incredible rate, consuming iron and producing acid - against rival groups and the United States military in Iraq. Iron Man was dispatched to investigate her, but found that Vitriol could dissolve his armor. Analysis of Vitriol's composition revealed that she was covered with an acid-resistant micro-organism which protects her from her own biological weapons. When she planned to douse Baghdad with her deadly bacterium, destroying the city completely, Tony Stark had her bombed with a giant amount of magnesium hydroxide ("Milk of magnesia"), which neutralizes acid. She was not heard from again.[2]

Fifteen years after Yinsen's death, Aftaab Lemar was serving in Southern Iraq under the command of another of Yinsen's murderers, General Zakim Karzai. The son of Ho Yinsen, wishing to avenge his father's death, took control of Tony Stark as well as his bio-enhanced Extremis Armor and flew to Iraq. Iron Man grabbed both Lemar and Karzai, flew them high into the sky, then let them fall to their deaths.[3]

Wolverine was sent on a covert mission to take down the organization Scimitar in Fadhil, Iraq. [4] Later he was shot by a group of men and it took him two days to heal. When he awoke in Baghdad he caught the scent of Mystique in the crowded room. She was disguised as a nun, he confronted her but she escaped. He followed her trail and then headed to Al Anbar where there are armed militants of some faction. He asked to speak with Mordad and to tell Mordad that "its the infidel who saved him" from the Russians in 1986.[5] Logan blew himself up in a car and, with help from Mordad and his men, manages to get his body into the army base where he heals and again and went after Mystique. The two meet up and have a small skirmish before again Mystique managed to escape and set some soldiers onto Logan.Mystique then hijacks a U.S Army truck and Wolverine, having dealt with the soldiers non-lethally, goes after her again. [6] Logan tracked her to a village in Iraq, the two then fought and she shot him in the face and Logan stabbed her in the gut. He healed and just got up and walks away leaving her on the ground to scream in pain.[5]

Flash Thompson served in in Iraq. However he he lost his legs after saving his partner from enemy forces.[7][8] He returned to the United States and was recruited as the new Venom when he was enlisted as a part of Project Rebirth 2.0.[9]

During the Iraq War the S.C.A.R.s, Strategic Capture And Retrieval, was developed by General Sam Ryan, Dr. Young Soo Pock, J. Jonah Jameson as a cybernetic update the Super-Soldier program acting as black ops for the United States Army. Three women were chosen for the team and each was given a different cybernetic enhancement. Unfortunately, the upgrades also cause mental instability and they went A.W.O.L.[10]

Nick Fury sent Captain America and the Ultimates to Northern Iraq to rescue American hostages. Becuase Ultimates were a domestic anti-terrorism/metahuman task force, sending such a powerful group of soldiers across international borders did not sit well with the world community including former team mate Thor.[11]

On Earth-33900; the US Army helped various superheroes on missions in Iraq.[12]

After his second tour in Iraq, Daniel Sylva had problems with his girlfriend who eventually left him and he couldn't find a job so he went for a third tour, now not caring to return alive. He described Iraq as a yellowish brown spot on Earth with every thing on it dying. After a soldier named Wahl disappeared, Danny's team got a lead on him. They walked into an ambush and all excluding Danny were killed. Danny found Wahl, strung up by his ankles with his throat cut while demons fed upon the human bodies, and their leader was his uncle's old enemy, Belathauzer.[14] Sylva was rescued by Isaac Kaufmann and his assistant, Gabir, who told him he's the next "Shagish Chultepi." Kaufman died from serious injuries and Gabir escorted Danny to a cave where the Devil-Slayer equipment was kept.[15] He then confronted an army of zombies and Danny succeeded in slashing them all. The Bloodstone, a mercenary group led by Belathauzer, warned the U.S. Army that Danny had killed all his soldiers and was now a deserter. When Sylva heard this he phoned his captain, but he didn't believe him. Suddenly the mercenaries attacked their safe-house and kill Gabir as Danny escaped.[16]

Retrieved from "https://marvel.fandom.com/wiki/Iraq_War?oldid=4664228"
Community content is available under CC-BY-SA unless otherwise noted.