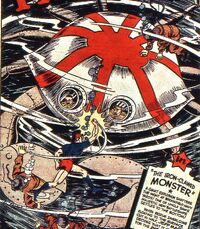 The so called "Iron Clawed Monster" was an invented by an unknown inventory that worked for Imperial Japan during World War II. It was a submersible with a design based off of the crab. In the summer of 1942, the device was used to sink an American vessel that was still at port. When military officials sent divers down to investigate what caused the vessel to sink, the Japanese agents inside slew them. When a bathysphere was sent down next, it was broken open and its crew killed as well. This time, the Japanese soldiers replaced the slain soldiers inside. By this time, reporters Jack Casey, Mary Morgan, and Jeff Mace had arrived on the scene. Mace quickly ducked away to change into the Patriot and dived in to investigate himself.

Below the waters, he was attacked by the the crab-like machine. Escaping into the bathysphere, the Patriot figured out the plot and was attacked by the Japanese infiltrators. When the Iron Clawed Monster attempted to grab Mace, he pushed one of the men into its claws, cutting him in half. The Patriot then swam out into the waters and pried open the crab-like vessel's opening hatch and pulled the pilots out and brought them to the surface to face justice.

The Iron-Clawed Monster was left at the bottom of the dock,[1] it's ultimate fate is unknown.

The Iron-Clawed Monster was an underwater vessel that appeared to function in higher levels of the sea. The absolute depths it could travel before ocean pressure would be too great are unknown; however, it does not appear that it was made to function in lower depths. It moved by mechanical "legs", the devices top speed is unknown. It could fit two passengers.

The Iron-Clawed Monster's primary and apparently only weapons come in the form of its "pincers", giant metallic claws that can cut a man in half and have sufficient force to wreck an American destroyer sufficiently to cause it to sink.

The Iron-Clawed Monster had an oxygen supply for its pilots. The total amount of time it could spend underwater and provide air is also unknown.

Retrieved from "https://marvel.fandom.com/wiki/Iron_Clawed_Monster?oldid=5514281"
Community content is available under CC-BY-SA unless otherwise noted.