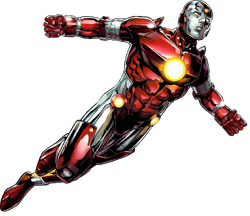 The neurokinetic Armor was given by Kang the Conqueror to his younger self. But instead of following in his footsteps, the teenage Nate took the armor and stole Kang's Time Chair to travel into the past and enlist the aid of the Avengers. With the Avengers disbanded, Nate downloaded the Vision's operating system including the Avengers Fail-Safe Program into his armor. Taking on the guise of Iron Lad, he used these plans to assemble a new team of "Young Avengers."[1][2]

Although one of Iron Lad's armor-suits became the Young Avenger Vision, Nathaniel appears to have constructed or received new neurokinetic armor.[4]

Like this? Let us know!
Retrieved from "https://marvel.fandom.com/wiki/Iron_Lad_Armor?oldid=6431950"
Community content is available under CC-BY-SA unless otherwise noted.