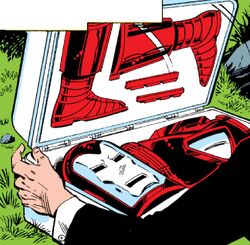 Most of Iron Man's armors can collapse to where they can fit within his briefcase.

It contains a number of safety devices to prevent others from opening it and using the armor. It is able to analyze the fingerprints of anyone who touches it. It is usually set to accept only the fingerprints of Tony Stark, but he may program it to the prints of others if he so chooses. If the fingerprints do not match those which it is programmed to accept, then knockout gas may be emitted. If forcible entry is attempted, it will self-destruct, to destroy both it and the armor.

Another safety feature includes a security handcuff attached to the locking mechanism on the outer top side of the briefcase. The other end of the handcuff is secured about Tony Stark's wrist.

The briefcase is also outfitted with computerized components that enable him to link-up with alternate computer networks. In function, it is not dissimilar to a modern day USB flash drive. Tony once used his briefcase to hack into the mainframe computer aboard the S.H.I.E.L.D. Helicarrier.[1]

Like this? Let us know!
Retrieved from "https://marvel.fandom.com/wiki/Iron_Man%27s_Briefcase?oldid=6437110"
Community content is available under CC-BY-SA unless otherwise noted.